There is much to say about Karl Lagerfeld. I had the pleasure of seeing Karl through Marvin’s eyes many years ago. He was then as extravagant, witty, eccentric and brash as he was to his last.

What I always loved about Lagerfeld was the paradox of his down to earth humility juxtaposed with his mega-icon status. He was both things. Simple yet complex. A self styled pantomime of pop culture. A brand of brands. The most rigorous of workers. The most opulent of lifestyles. Rarified yet commercial. He was the king and the cobbler all at once.

So why go on with any other words than Karl’s?

On his early start:  "When I was four I asked my mother for a valet for my birthday."

On sunglasses:  "They're my burka... I'm a little shortsighted, and people, when they're shortsighted, they remove their glasses and then they look like cute little dogs who want to be adopted."

"Vanity is the healthiest thing in life.

"I am like a caricature of myself, and I like that. It is like a mask. And for me the Carnival of Venice lasts all year long.”

“There is no secret to life,” Lagerfeld said. “The only secret is work. Get your act together, and also, perhaps, have a decent life. Don’t drink. Don’t smoke. Don’t take drugs. All that helps.”

“Sweatpants are a sign of defeat. You lost control of your life so you bought some sweatpants”

“Change is the healthiest way to survive”

“Black and white always looks modern. Whatever that word means”

“What I love best in life is new starts”

"Chic is a kind of mayonnaise, either it tastes, or it doesn't."

"I'm very impeccable and clean before I go to bed. It's just like right before I'm going out. When I was a child, my mother always told me that you could wake up in the middle of the night and be deathly sick, so you always have to be impeccable. I laugh about it now, but I think everyone should go to bed like they have a date at the door."

On designers who complain:

"Please don't say I work hard. Nobody is forced to do this job and if they don't like it, they should do another one. If it's too much, do something else. But don't start doing it and then say, 'Aaaah, it's too much'. Because a lot of people depend on it. What we do at Chanel, thousands of people work on these things; these things are sold in hundreds and hundreds of shops all over the world. People like the big machine, and the money the big machine involves, but the effort... Then, suddenly, they become artists. They are too weak. Too fragile. Non. We have to be tough. We cannot talk about our suffering. People buy dresses to be happy, not to hear about somebody who suffered over a piece of taffeta. Me, I like to make an effort. I like nothing better than concrete reality. I'm a very down-to-earth person, but it is my job to make that earth more pleasant."

"What I do Coco would have hated. The label has an image and it's up to me to update it. I do what she never did. I had to find my mark. I had to go from what Chanel was to what it should be, could be, what it had been to something else."

On retirement and work: "Why should I stop working? If I do, I'll die and it'll all be finished. 'm lucky to work in the most perfect of conditions. I can do what I want in all kinds of areas. The expenses are not expenses. I would be stupid to stop that. Work is making a living out of being bored."

Images painted by Karl Lagerfeld for Marvin and Lee Traub. Published in Like No Other Career, Assouline Publishing, 2008. 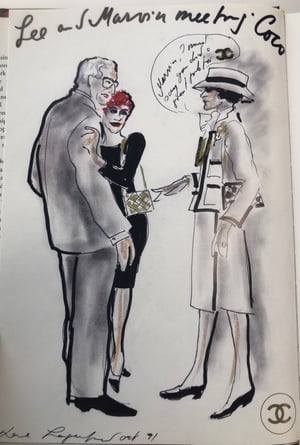 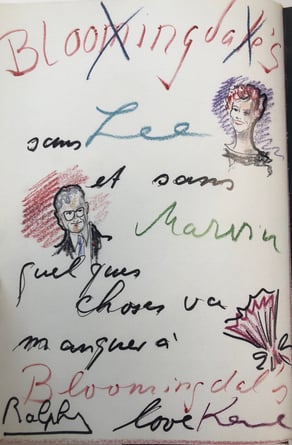