There’s a different kind of pressure retailers feel now. Fear of a retail ice age has subsided; Amazon is big but not so bad, and streamlining, cost-cutting and bankruptcies continue, though not on the scale of recent years. It’s now about picking up the pace of innovation and what technologies to bet on; personalization; creating “frictionless” and relevant shopping experiences through collaborations and new services, and planning for potential recession and a consumer spending slowdown, all of which were major themes permeating the NRF 2019 Retail’s Big Show this week at the Jacob K. Javits Convention Center in New York. WWD

Government Shutdown Hits Economy Worse Than Thought
The political standoff is now in its fourth week, making it the longest government shutdown in history as Trump squares off with Congress and tries to secure $5.7 billion to build a long-promised wall to keep out illegal immigrants — a barrier that Trump repeatedly promised would be paid for by Mexico. Economists have been warning for weeks that the shutdown could impact the economy with furloughed workers left with little choice but to curb spending, and now the White House’s top economist is seeing the impact, too. Consultancy Challenger, Gray & Christmas Inc. estimated on Wednesday that the economy would lose $3.38 billion in consumer spending a month as 800,000 federal workers tighten their belts amid a partial government shutdown. WWD

The new service allows shoppers to receive certain products on a regular timeline of their choosing — weekly, monthly, twice a year or anything in between, Sharkey said. Each subscription box comes with a surprise gift. Brandless also announced it will give two extra meals to Feeding America per subscription box. The startup, which launched mid-2017, ended 2018 with over 400 products in its assortment, and it plans to double its offering this year. Retail Dive

Period underwear brand Thinx is partnering with Nordstrom to sell in the retailer’s online and physical stores. The partnership is a first for both brands: For Thinx, it is the first time its product will be carried by a major U.S. retailer. Until now, the brand has been entirely direct-to-consumer, selling online and through temporary pop-up shops. Beginning this week, Thinx products will be sold on Nordstrom’s online store, along with five of its store locations in Dallas, Los Angeles, Chicago, Seattle and Lone Tree, Colorado. Glossy 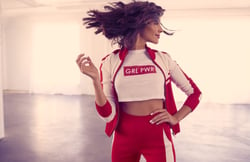 Olivia Culpo held court Wednesday morning at ABC Cocina, where she introduced her new Express x Olivia Culpo collection. The collection is Culpo’s take on power dressing and street style and emphasizes “GRL PWR,” which is emblazoned on some of the pieces. It’s essentially a wardrobe capsule for the girl on the go. Discussing how she got together with Express, Culpo told WWD, “It was a pretty organic meeting. I worked with Express before on a few one-off things. I personally was always inspired to design things that are appropriate for the everyday girl at an appropriate price point so that anybody can wear it and feel good.” The collection is inspired by “GRL PWR” and comes in XXS to XXL and 0 to 18. WWD

How Bloomingdale's Is Reinventing The Beauty Shopping Experience

In his classic book, Like No Other Store, the late, great Marvin Traub commented on Charles Revson’s famous trope, “In the factory we make cosmetics; in the store we sell hope.” Traub wrote, “If cosmetics companies sold fantasy, we set out to be the dream factory.” Bloomingdale’s executive team and its beauty brand partners have been dreaming about what its next-generation dream factory needs to be...“Our mission is to create energy and excitement that radiates throughout the store,” Klein continues. “ It’s retail as theatre. It’s entertainment that customers can’t get at home shopping." Forbes

Nike Creates New Digital Platform
The sporting goods powerhouse on Tuesday unveiled Nike Adapt, a new platform centered around a basketball shoe that uses an app to create a custom fit through a power-lacing system. In its first iteration, the app will also allow the wearer to change the color of the shoe, check the remaining battery power and provide feedback to Nike. Ultimately, the company said, the technology can be applied to everything from performance and lifestyle footwear to apparel. WWD

Walgreens testing in-store coolers with IoT ad displays
Walgreens reportedly has been testing Internet of Things-enabled smart displays installed in cooler doors in a Chicago store that are capable of showing targeted advertising to shoppers The screens, sensors, cameras and other technologies, including face detection, that make up these systems can sense the likely age of an approaching shopper, which products they've picked up and other clues that allow it to display what it computes is an appropriate ad for that shopper. Retail Dive

Gymboree to Go Out of Business After Second Bankruptcy Filing

Gymboree Group has filed a voluntary Chapter 11 petition for bankruptcy court protection so it can wind-down operations and shutter all stores in an orderly fashion. The children’s retailer and ten affiliates filed petitions late Wednesday in a U.S. bankruptcy court in Virginia. The company has asked the court to file its jointly administered cases under Case No. 19-30258. A Canadian subsidiary is expected to file for insolvency in the Ontario Superior Court of Justice. Gymboree said it intends to facilitate a wind-down of all its Gymboree and Crazy 8 stores. The company will likely disclose in the next day or two which liquidator it has selected to handle the going-out-of-business sales at the stores. Sourcing Journal