Nordstrom is making sustainable shopping more accessible for its consumers. The luxury department store has launched a new online shopping category to help shoppers discover sustainably made products. This news comes alongside Nordstrom's commitment to the G7 Fashion Pact. Called "Sustainable Style," Nordstrom's new category features more than 2,000 items from 90 brands, including Treasure & Bond, Patagonia, Reformation, Eileen Fisher, S’well, Toms, Veja and Caudalie. Nordstrom has seen an increasing level of customer interest in consciously made products. Every product featured in the Sustainable Style must meet at least one defined standard of sustainability that the retailer has outlined. These criteria include being produced with at least 50 percent sustainably sourced materials or having been manufactured in a facility that meets high environmental or social standards. Fashion United

After years of rolling out private-label brands in apparel and home goods, Target is starting a new grocery brand. Products from the new line Good & Gather will hit Target stores beginning Sept. 15. The retailer said that by the end of 2020, the brand will have more than 2,000 items — everything from organic pizza crusts, milk and eggs, hazelnut and peanut butter spreads, frozen veggies, salad mixes and pastas. Target said it expects Good & Gather will be a multibillion-dollar brand — and the largest of its private labels. CNBC

China To Impose New Tariffs On $75B U.S. Goods

China said Friday that it will impose new tariffs on some $75 billion in goods imported from the U.S., the latest in a series of retaliatory responses in the ongoing trade wars between the two nations. China’s Customs Tariff Commission said it is imposing the tariffs in response to the U.S. government’s additional 10 percent tariffs on approximately $300 billion in goods imported from China. The U.S. government’s tariffs, which will impact footwear and apparel, are set to be implemented in September and in December. WWD 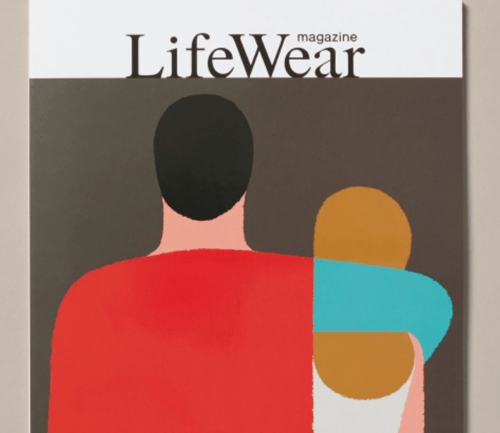 Add Uniqlo to the growing list of companies that see print magazines as a “new” way to get in touch with consumers. Airbnb has one, so does Bumble and even Facebook, all of which are essentially extended marketing campaigns for their product, be it home-sharing, a dating app or the behemoth of social media. And Uniqlo’s foray into the realm of print publishing, accompanied by a digital version (available to download only on an Amazon Kindle), doesn’t seem much different. A 120-page magazine that will be available for free in stores next month when the fall/winter collection comes is dubbed LifeWear, also how the company refers to its apparel, and shows off only Uniqlo product, its paid ambassadors and its customers. WWD

Add Banana Republic to the growing list of retailers getting into the rental business. Starting in September, the online subscription service, named Style Passport, lets U.S. shoppers rent up to three pieces of women’s apparel a month for $85. The subscription includes free shipping, unlimited exchanges and laundering services. Shoppers also have the option to buy later if they like. WWD

Tatcha is the latest beauty brand to bet on personalization. In July, the Japanese-inspired company quietly rolled out on Tatcha.com its Ritual Finder tool, which is meant to boost e-commerce conversion and retention. The feature prompts users to choose whether they are a Minimalist, meaning they may not be heavily embedded in skin care and want the fewest amount of products; a Ritualist, if they have an existing skin-care routine; or an Enthusiast, if they’re a beauty junkie who’s spent hundreds of dollars on skin care. Tatcha’s full assortment of 30 products are featured in the quiz, and more than 500 iterations of routines can result, said Andrea Carver, Tatcha vp of digital product of development. Glossy

Canadian private equity firm Catalyst Capital Group Inc. bought a 10 percent stake in Hudson’s Bay Co. through a previously announced tender offer as part of its efforts to block a proposed takeover by the retailer’s chairman. The Toronto-based firm said in a statement it had received and accepted about 18.5 million shares in Hudson’s Bay for roughly C$187 million ($141 million) in cash at C$10.11 per share. That’s a premium to a C$9.45 a share offer from Chairman Richard Baker and his partners. The stock jumped 9 percent to C$10.22 in Toronto, the biggest gain in more than two months. BoF

The developer of American Dream, a mall and entertainment complex outside New York City, is so confident this much-delayed project will succeed it is putting ownership of its two most high-profile holdings at risk. Triple Five Group, which owns the Mall of America in Bloomington, Minn., and West Edmonton Mall in Canada, has pledged 49% interest in these two properties as collateral to secure a $1.67 billion construction loan for the East Rutherford, N.J., project, loan documents show. That means if American Dream fails and the developer defaults on the loan, Triple Five would have to give up nearly half its ownership in these malls, which the firm has owned for decades. WSJ