As consensus among youth globally builds toward addressing climate change and other social issues, business is increasingly stepping into a vacuum left by governments unwilling or unable to take action. On Friday, Patagonia, Lush and several other retailers shuttered stores in solidarity with students leaving classrooms to stage demonstrations in support of climate change action. Lush also closed its U.S. retail and e-commerce operations for the day, according to a company blog post and information emailed to customers. RetailDive

By now, it's a common story: A trendy product from a hot startup starts to break into mainstream popularity, and suddenly Amazon has a copycat version. The e-commerce giant's latest target is Allbirds, the 3-year-old maker of "the world's most comfortable shoe," with a burgeoning reputation for quality and commitment to environmental sustainability. The Amazon-branded 206 Collective Men's Galen Wool Blend Sneakers bear a striking resemblance to Allbirds's most well-known product, the Wool Runners--at a significantly lower price point. The Allbirds shoes sell for $95 per pair, compared to Amazon's $35-45 price range. Inc.

Following Gucci’s decision earlier this month, parent group Kering will today reveal it is also committing to becoming carbon neutral across the board and throughout its entire supply chain. A pioneer in engaging in sustainable practices, with this latest development the French group is pledging to offset its annual Greenhouse Gas (GHG) emissions from 2018. Starting in 2015, the Science-Based Target aims to reduce by 50 percent all of Kering’s GHG emissions related to its own operations and supply chain by 2025. Kering’s commitment is an extension of its annual offsetting approach established in 2011, leveraging its Environmental Profit and Loss accounting to analyze the group’s GHG emissions, including the base of its supply chain. WWD

Stella McCartney made her first outing as the new public face of LVMH Moët Hennessy Louis Vuitton’s green initiatives, exhorting the French luxury conglomerate’s key executives on Wednesday to become part of the global conversation about climate crisis. McCartney, who split from French rival Kering last year after a 17-year partnership, revealed in July she had sold a minority stake in her brand to LVMH, which has appointed her as special adviser to its chairman and chief executive officer Bernard Arnault and executive committee members. WWD

The food-beauty overlap may officially be cemented, now that the Sakara Life is launching with Sephora. The direct-to-consumer nutrition company is launching three stockkeeping units online with Sephora on Sept. 24. “They told us that they were curating the best in ingestible beauty,” said Whitney Tingle, Sakara Life’s cofounder. “They are realizing that the consumer that typically looks to beauty as just concealer and mascara, highlighter, whatever, is now really looking to beauty from within,” said Danielle DuBoise, cofounder of Sakara Life. “It signals the beauty consumer base is really ready to talk about ingestibles and beauty from within.”  WWD

Louis Vuitton is designing new skins for League of Legends

League of Legends is taking a big step into the world of fashion. Today, developer Riot Games announced a new partnership with Louis Vuitton that will see the famed fashion house design League-themed items for both in the game and in the real world. Unfortunately, we don’t know what those designs will look like yet, but there will be two main components. First, Louis Vuitton will be creating a bespoke case for the Summoner’s Cup, which is the trophy given out each year to the team that wins the League of Legends World Championship. This year’s event will kick off with play-in games in Berlin on October 2nd, building up to the finals on November 10th in Paris. Riot says that the case “will feature both traditional Louis Vuitton savoir-faire, along with cutting-edge, high-tech elements inspired by the League of Legends universe.”  The Verge

With its roots reaching back to 1898, RIMOWA has enduringly placed quality and innovation at its core while championing its heritage and craftsmanship. When the global leader in premium luggage introduced parallel grooved aluminum into the manufacture of its suitcases in 1937, it revolutionized the industry — and became an instantly recognizable design object in the process. More recently, in 2000, RIMOWA pioneered again with its innovation of the first polycarbonate case on the market, and in 2017, joined LVMH group with the view of preserving the vision that has driven the company for over a century. Today, collaborations with leading artists and designers on limited edition luggages and accessories are some of the most sought after travel accompaniments, taking the brand to new heights. In continuing its legacy of iconic collaborations, RIMOWA has partnered with Sotheby’s on its first historical retrospective — a monumental exhibition encompassing decades of travel tools, and tracing the evolution of its innovative history. DesignBoom

When Jennifer Lopez walked the runway during Versace’s show at Milan Fashion Week on Friday, showing off an updated version of the infamous dress she wore to the Grammy Awards nearly two decades ago, the appearance nearly broke the internet. Social media exploded with photos, videos and mentions of Lopez in the dress — a bright green jungle print dress made of silk chiffon with a revealing neckline and slit. Lopez walking in the Versace show had $9.4 million worth of media mentions and online engagement, according to Launchmetrics (a quarter of London Fashion Week, which was $36 million, according to Launchmetrics).The hype was so enormous, it felt like the spectacle was perfectly planned sponsored content. BoF

Creative Director Julien Dossena will launch menswear during his Spring/Summer 2020 show on Thursday, as the brand capitalises on the success of its womenswear line. "The idea is to extend to menswear what we do in womenswear," said Paco Rabanne Chief Executive Bastien Daguzan. "There is a continuation in fabrics and prints. For some categories like jersey, knits, t-shirts, accessories, it was seamless." The men's collection will be distributed exclusively by five retailers and in Paco Rabanne's own e-shop, with the line delivered to stores globally in December this year. The collection will be expanded gradually, with the brand targeting for at least 25 percent of its revenues to come from menswear within the next five years. BoF 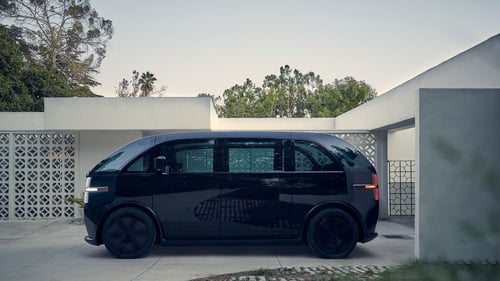 Canoo, a California startup that plans to offer electric vehicles by subscription, is unveiling its first model at its headquarters in Los Angeles Tuesday evening, Sept. 24. About 500 partygoers will have a chance to sit inside the the car, a breadbox-shaped van the company calls Canoo. With seven seats and an estimated range of 250 miles, the bus was designed to meet the needs of city dwellers who currently drive SUVs, according to Canoo co-founder Ulrich Kranz. Seats in the rear cabin are arranged in a U-shape, like a sectional sofa, rather than in rows. The battery, powertrain and suspension are all housed in a slim platform, leaving 188 cubic feet of space for passengers and cargo. “I would call it a loft on wheels,” said Kranz. “It has the interior space of a large SUV and the footprint of a compact car.” Bloomberg