Here's TRAUB's roundup of recent retail news. Louis Vuitton and the NBA confirm a multiyear partnership, Louis Vuitton announce the opening of a restaurant, PepsiCo to get all its US electricity from renewable sources, Nestlé to invest up to $2B in sustainable packaging, and more. 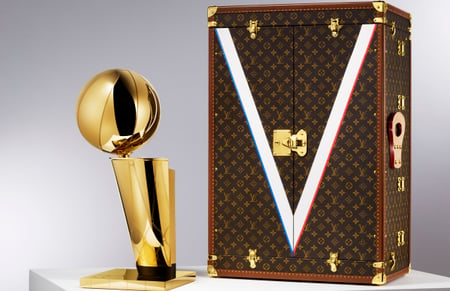 In the latest marriage between luxury and sport, Louis Vuitton and the NBA on Wednesday confirmed they have entered a multiyear partnership that will include a capsule collection of apparel and accessories designed by Vuitton men’s wear creative director Virgil Abloh. As reported by WWD on Jan. 15, the French fashion house is hosting a cocktail at its flagship on Avenue Montaigne in Paris to celebrate the tie-up and unveil the exclusive travel case it has made for the Larry O’Brien Trophy, presented annually in June to the NBA team that wins the finals. WWD

Louis Vuitton Is Opening a Restaurant

Breakfast at Tiffany’s — and dinner at Louis Vuitton? LVMH Moët Hennessy Louis Vuitton keeps diving deeper into the hospitality business and will open its first Vuitton café and restaurant next month at its new flagship boutique in Osaka, Japan, WWD has learned. Michael Burke, chairman and chief executive officer of Vuitton, confirmed the development, and hinted that eateries and even hotels could be a future expansion avenue for the mega brand, which on Tuesday night unveiled the Sewelô, a 1,748-carat stone billed as the second-largest rough diamond ever discovered. WWD

Bose to Close All US Stores

Bose announced that it will close all 119 retail stores in North America, Europe, Japan and Australia in the coming months, according to a company statement emailed to Retail Dive. Approximately 130 stores in Greater China and the United Arab Emirates will stay open, along with additional stores in India, Southeast Asia and South Korea, per the announcement.The company will offer severance and outplacement assistance to impacted employees, but declined to state the exact number of workers that will be affected. Retail Dive

Papyrus Parent to Close All Stores

Stationery retailer Papyrus is closing stores around the U.S., with liquidation sales already underway.The company has not announced the closures publicly, but employees at stores in multiple states confirmed that their stores will close and they have been told to display sale signs. A Retail Dive reporter observed a store in Washington, D.C., with makeshift 20%-off signage throughout the store that noted all sales were final. Retail Dive

PepsiCo to Get All its US Electricity From Renewable Sources

PepsiCo will get all of its electricity in the U.S. from renewable energy sources such as wind and solar later in 2020, the company said in a statement. The U.S. is the food and beverage company's largest market and accounts for nearly half of its total global electricity consumption. PepsiCo's efforts in the U.S. reflect similar initiatives in other parts of the world. The company said nine countries in PepsiCo's European direct operations already get 100% of their electricity demand from renewable sources. In addition, 76% of the electricity needs of the PepsiCo Mexico Foods business were delivered through wind energy in 2018.  Food Dive

Nestlé to Invest up to $2B in Sustainable Packaging

Nestlé plans to spend as much as 2 billion Swiss francs ($2.1 billion) to shift its packaging from virgin plastics to food-grade recycled plastics and increase its development of more sustainable solutions.The food giant said it will buy up to 2 million metric tons of food-grade recycled plastics and devote more than 1.5 billion Swiss francs ($1.6 billion) to pay a premium for these materials between now and 2025.The company also will launch a sustainable packaging venture fund​ with 250 million Swiss francs​ ($260 million) to invest in start-up companies focusing on these areas. Food Dive

The delivery wars have a new battleground: digital pickup. Grubhub announced Thursday it is launching Ultimate, which uses software and hardware to allow restaurants to offer customers the ability to order their food online or through an app for pickup. Founder and CEO Matt Maloney said the food delivery company is focusing on marketing the technology to small- and medium-sized restaurants. CNBC 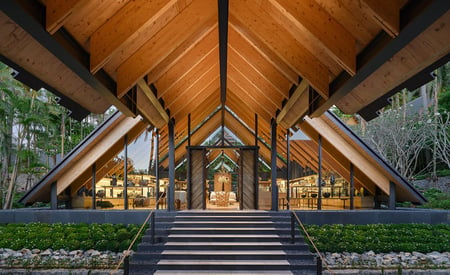 At the Amanpuri in Phuket, Aman has enlisted Japanese architect Kengo Kuma to design a holistic pavilion to house a new retail concept. Reflecting Aman’s philosophy, the structure fuses traditional principles of Asian architecture with modern design with its rhythmic formation of floating roofs achieved through progressive engineering by Kengo Kuma and Associates. Wallpaper Magazine