Here's TRAUB's roundup of recent retail news. Barneys confirms its new owner is Authentic Brands Group, Zac Posen closes his namesake, Birchbox to pop up in 500 Walgreens stores for the holidays, and more!

After a contentious three-month auction process, Authentic Brands Group and B. Riley Financial Inc. are the new owners of Barneys New York, in a deal that will see most of the struggling luxury retailer’s remaining stores close and its name licensed to rival Saks Fifth Avenue. The licensing company’s $271.4 million sale was approved in a bankruptcy hearing Thursday morning, but the judge left room for a last-minute bidder to offer a deal that allows some portion of the business to remain in operation before the papers are signed. BoF

Zac Posen is shutting down his namesake line. The New York designer, known for his glamorous red carpet gowns, announced on Friday that after failing to find a buyer or new investors, the board of managers decided to close his business down. The news comes during a challenging period for independent American designer brands, which have been undermined in recent years by the decline of the department store model and the rise of fast fashion and online shopping, as well as stiff competition from the European luxury conglomerates. BoF 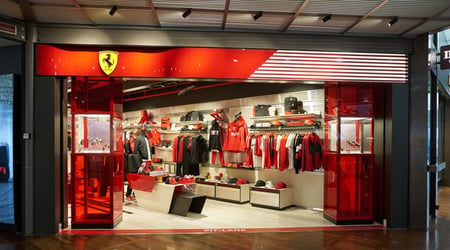 Ferrari Brings In Armani to Boost to Its Luxury Brand

Ferrari NV is aiming to move further upmarket with its branded accessories by teaming up with another iconic Italian name, Giorgio Armani SpA, to help push the supercar maker’s handbag and clothing lines into the premium-price space. Chief Executive Louis Camilleri is tackling a long-held goal of former Chairman Sergio Marchionne, who died in 2018: transform Ferrari into a fully fledged luxury brand. After raising guidance for 2019 sales and profit, the company said on Monday that branded goods will contribute 10 percent of earnings before interest and tax within the next 7-10 years.  BoF

Puig Futures Explores the Nespresso of Perfume and Zero-Plastic Beauty

An Alchemist Atelier for concocting bespoke scents. A direct-to-consumer perfume and makeup brand to empower women, and a zero-plastic fragrance and beauty label. These are among the fruits of Puig Futures, an innovation platform through which the Spanish beauty giant Puig taps into creative talent — both internal and external — including tech firms and other visionaries. WWD

Birchbox To Pop Up In 500 Walgreens Stores For The Holidays

Birchbox will expand its brick-and-mortar partnership with Walgreens for the holiday season, from 11 permanent locations to 500 pop-ups, according to a company press release emailed to Retail Dive. The Birchbox shop-in-shops will be available in Walgreens stores in 44 states beginning this Friday and run through the end of December. The holiday Birchbox fixtures will be positioned at the front of the store in a "grab-and-go holiday gifts" format, according to the release, and will include items like Birchbox subscription gift cards, travel-size beauty essentials (in under $10 and under $20 sections), limited edition travel-themed Birchbox Beauty and Birchbox Grooming boxes, and an Advent calendar collaboration between the beauty brand and Walgreens.  Retail Dive

Ralph Lauren Corporation introduced digital product identities for products to verify authenticity as the goods move through the supply chain, the company announced in a press release emailed to Retail Dive. The brand partnered with EVRYTHNG, an internet-connected software company, and Avery Dennison, a manufacturing and technology company, to roll out the digitization effort.With the digital product identities, consumers can authenticate merchandise, view product information and receive styling advice by scanning the QR code on the product label with a smartphone, per the brand's press release. Retail Dive

When Andrew Bolton, the curator in charge of the Costume Institute of the Metropolitan Museum of Art, had to come up with a blockbuster in celebration of the Met’s 150th anniversary in 2020 — a blockbuster to follow the blockbusters that were about Catholicism and camp; a blockbuster to do what blockbusters do, which is lure people into the museum — he was stumped. “I wanted to do an exhibition focused on the collection, but not a traditional masterworks exhibition,” he said. “Something that connects to the zeitgeist, and what people are talking about now.” Then he had an idea. And then he thought, “it’s about time.” About time for what?  The New York Times

Earlier this month, Google unveiled the new Google Shopping experience in the US, introducing a range of new features, some of which have a very Amazon feel to them. Google’s been playing catch-up on the e-commerce front for many years while Amazon keeps chipping away at its search ad dominance. In response, Google has completely revamped the Google Shopping experience, which now looks like a genuine e-commerce platform and potential Amazon rival. The Drum

“Pandora is on a journey,” said Sid Keswani, the Copenhagen-based jewelry brand’s president of the Americas, “and we know transformation doesn’t happen overnight.” It’s a sentiment that rings true in recent months as the brand, known for its customizable charms, pushes forward with a massive rebranding effort. The refresh, which the jewelry brand kicked off in Los Angeles with a consumer-facing street art celebration and influencer luncheon, sees the brand take on a new visual identify, redesigned logo, an updated web site, and launch new collections. Now, just in time for the holiday season, the relaunch is entering a new phase with the opening of a retail concept at the Westfield Garden State Plaza in Paramus, N.J. WWD