Happy Holidays! As we round out an exciting year in retail news, here's TRAUB's final news blast of 2019. We published our fourth and final annual study of The New Davids, Chanel and Farfetch unveil 'boutique of tomorrow', EBay drops all sneaker selling fees, and more. 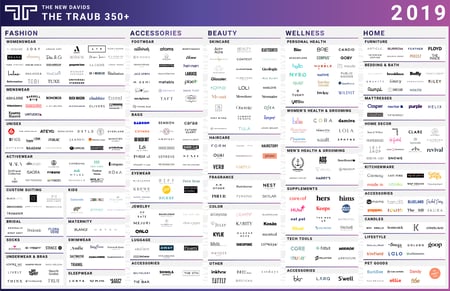 In the spirit of continuing a TRAUB tradition, this year we revisited our previous US New Davids report for our fourth and final annual study. In this year's study we curated a selection of 350+ digital native brands across five key categories: fashion, accessories, beauty, wellness and home. In the report, we focused on ways in which New Davids are expanding into multiple distribution channels including retail and wholesale. You can download the full report here and read more in a featured article in industry publication, WWD. 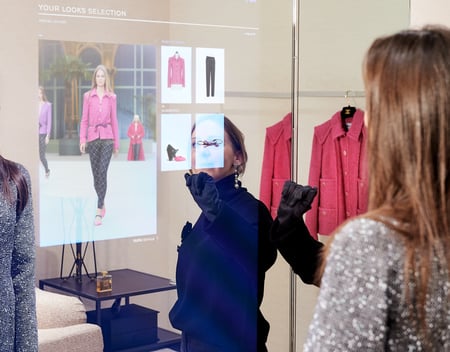 Chanel and Farfetch are finally ready to roll out their “boutique of tomorrow.” Almost two years after announcing an exclusive long-term tie-up, the French fashion house and the luxury e-commerce platform have unveiled the first results of their pilot digital innovation project at 19 Rue Cambon, Chanel’s largest store in Paris, as they prepare to share the technology with other boutiques in the French capital. WWD

For anyone who has sold clothes through a reseller, selling fees are a natural part of the process, with platforms taking a percentage of a sale, a flat fee or a tiered fee based on a seller’s frequency of selling. But eBay, in a play to siphon sellers from other players in the sneaker resale space, has dropped selling fees for sneakers entirely. EBay typically charges around 10% of the item’s sale value, with variations based on the product sold and the seller’s account tier. But as of Tuesday, sneakers no longer carry any selling fees for pairs sold for more than $100. To support this change and bring more attention to its sneaker category, eBay began dropping a new colorway of the Yeezy 700 for below the retail price every day since Tuesday. It will have seven more mystery drops daily starting on Thursday.  Glossy

Facebook Acquired a Start-up to Build a Live Shopping Feature

Facebook Inc. acquired a small video-shopping start-up earlier this year to help build a live shopping feature inside the company’s Marketplace product, according to a person familiar with the plans. The social media company bought Packagd, a five-person company founded by Eric Feng, a former partner with Kleiner Perkins Caufield & Byers, and most of the start-up’s team joined Facebook in September. Packagd was building a shopping product for YouTube videos. “Think of it as a re-imagination of QVC or a home shopping network,” Feng said in a 2017 interview with Bloomberg Television’s Emily Chang. The acquisition by Facebook wasn’t announced, but the small team is now working on a project for Marketplace, which would let users make purchases while watching live video broadcasts. BoF

Rebecca Taylor introduces ReCollect: a new program that repurposes, recycles and resells pre-loved Rebecca Taylor clothing. The brand has been committed to crafting timeless, quality, and enduring pieces and ReCollect offers an opportunity to extend the lifecycle to those pieces while reducing waste and encouraging responsible consumption. ReCollect is a platform that allows customers the opportunity to trade-in their gently worn Rebecca Taylor clothing for a $15 credit per item that can be redeemed in all Rebecca Taylor boutiques and on their e-commerce site. “As a brand we are enthusiastic about engaging our customers in new ways, we were one of the first brands to launch an in-house rental program. ReCollect, not only allows us to connect with our consumer in a new way but will also provide an opportunity for both our customer and our brand to participate in the circular economy. These new platforms (both rental and resale) open up new ways to interact with the brand for our customer and enables us to acquire new customers,” shared Rebecca Taylor CEO, Janice Sullivan. Forbes 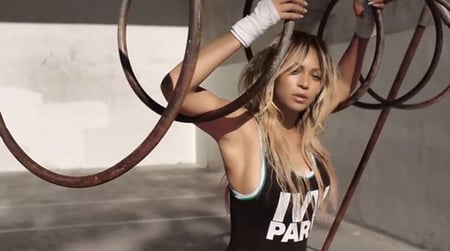 Adidas will start selling a new collection designed with singer Beyoncé on January 18 in a relaunch of her Ivy Park brand that includes shoes, clothes and accessories, mostly in maroon, orange and cream. Adidas described the collection, which features on the cover of January's Elle magazine, as gender-neutral. It includes jumpsuits, cargo pants, hoodies and cycling shorts, mostly featuring signature Adidas triple-stripes. The German sportswear brand announced it was teaming up with the singer in April to relaunch the Ivy Park brand Beyoncé started in 2016 together with British fashion chain Topshop. The company did not give financial details. BoF

With Merger And Possible IPO, Peet’s Coffee May Finally Become A Real Challenger Against Starbucks

Starbucks, the world’s largest coffeehouse chain, may be about to get a jolt on the competitive front. Its U.S. rival Peet’s Coffee is tying the knot with Jacobs Douwe Egberts, or JDE, a European packaged-coffee giant housing labels including Jacobs Coffee, Douwe Egberts, Senseo and Tassimo, the parties said Tuesday. The combined company, called JDE Peet, will explore selling shares to the public next year. Together, they have 7 billion euros in combined sales, or $7.81 billion, with a presence in more than 140 countries. Starbucks had sales of $26.5 billion in the year through Sept. 29.Forbes

Capri Holdings, the parent of Mickael Kors, Versace and Jimmy Choo, has agreed to acquire Italian footwear factory Alberto Gozzi S.r.L., located in Pistoia, Tuscany. The factory has been family-owned since its founding in 1974. The deal is expected to close in the first three months of 2020, and the factory will begin to produce Jimmy Choo and Versace styles before adding production of the higher-end Michael Kors Collection at a later point, a representative for Capri told BoF. The deal marks the first factory acquisition for the newly formed Capri group, which is likely seeking to own more of its supply chain as a way to be competitive in an increasingly consolidated luxury goods market dominated by French groups LVMH and Kering. One way to battle the conglomerates — which box out competitors from prime space at multi-brand retailers, deals with manufacturers and leases in top real estate — is to become a more vertically integrated business. BoF

Tiller & Hatch Supply Co., a new brand of high-quality and wholesome meals, has launched at Walmart stores nationwide and on tillerandhatch.com. Backed by global superstar Jennifer Lopez and Major League Baseball great Alex Rodriguez, who’ve both been committed to making health and wellness a central part of their lives, Tiller & Hatch was also developed in partnership with preeminent brand developer Launched.LA. The initial line features eight restaurant-quality dishes created by Bruce Hecker of Bruce’s Catering, known for serving the entertainment industry; all of the meals are designed to be flavorful, nutritious and budget-friendly. Founded with a commitment to giving back, a portion of the proceeds from all sales will benefit a variety of shelters and charities working to fight hunger. Nosh