As of last week, Stitch Fix's "Shop Your Looks" is out of beta and available to all women's and men's customers in the U.S., a spokesperson told Retail Dive in an email.Stitch Fix CEO Katrina Lake in October first announced that the company was testing the algorithm-led sub-service, which allows customers to choose among items that would go well with pieces they already own, rather than leaving that type of choice to their stylist. Retail Dive

Walmart Inc. is shutting down its Jetblack personal-shopping service and laying off most of its roughly 350 staffers after the retailer abandoned plans to find investors for the unprofitable operation. The New York City-based unit, which offers fast product delivery on orders placed through text message, will stop delivery services on Feb. 21, a Walmart spokesman said. The Wall Street Journal earlier reported that Walmart was planning to end its Jetblack service and restructure the organization. WSJ

The maker of Schick razors said it abandoned plans to buy upstart rival Harry’s Inc., a week after the Federal Trade Commission sued to block the $1.37 billion deal. Shares of Edgewell Personal Care Co. rose nearly 28% Monday. Investors had been wary of the deal due to the multiple Edgewell had agreed to pay for Harry’s, a company that was growing quickly but losing money. Monday’s gains pushed Edgewell’s total market value to about $2.1 billion. WSJ

Today direct-to-consumer retailer Brandless becomes the first SoftBank Vision Fund-backed startup to close down, as it stops taking orders and halts all business operations. The company will be laying off 70 people, or nearly 90% of its staff, according to a company spokesperson. The last 10 employees will stay to finish the remaining customer orders and evaluate any acquisition offers. Brandless' closure marks the end of a turbulent, short run that began 2.5 years ago and was beset with a challenging business model from the start. In a statement, the company blamed a "fiercely competitive" retail market that was "unsustainable" for its business. Protocol

Watch out, Away: Target has a new line of affordable, high-quality suitcases

Retail powerhouse Target has become increasingly adept at launching in-house product lines, from houseware basics to mid-century furnishings, and turning them into billion-dollar brands. The latest product category it’s set to disrupt: suitcases and travel gear. The company recently launched Open Story, a line of high-quality luggage with prices ranging from $19.99 to $179.99. If this all sounds familiar, it’s because it bears some resemblance to suitcases from direct-to-consumer startup Away. Over the past five years, there’s been a transformation in the luggage sector, with the arrival of a flock of new brands including Away, ROAM, and Arlo Skye that have promised better-quality luggage at reasonable prices. Fast Company 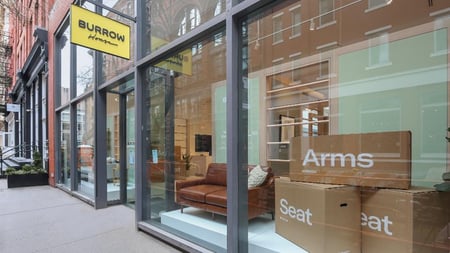 Furniture Disruptor Burrow Has A New Idea For Its Stores: Retail Roommates

When direct-to-consumer furniture brand Burrow was looking for a larger home for its New York City flagship, it made a decision its millennial customers can relate to. It invited some roommates to share the new space. The result is a store that could signal a trend in the clicks-to-bricks category: collaborative partnerships by direct-to-consumer brands. Burrow this week is moving into its new flagship, named Burrow House, at 47 Wooster Street, in Soho, located about three blocks from the original Burrow store on Greene Street. The new 2,200-square-foot store has twice as much floor space to better showcase Burrow’s expanded offerings, but it also serves as a showroom for two other direct-to-consumer brands: online paint retailer Clare, and online plant seller The Sill. Forbes

Part of Macy’s strategy to try to keep shoppers interested in its stores is to revamp its private labels, with the goal of offering customers something so unique they cannot find it anywhere else. Walking through its turnaround plans with investors, the department store chain said Wednesday that it is on track for its private brands to make up 25% of sales by 2025. And Macy’s said it will grow four of its “best” in-house brands — International Concepts, Alfani, Style & Co., and Charter Club — to be worth $1 billion each. CNBC