Target plans to launch a new private label luggage brand next week, according to a corporate blog post. Dubbed "Open Story," the line includes nearly 40 luggage products and accessories. Prices range from around $20 to $180, which the retailer says is 25% to 30% lower than "comparable" brands. Products include hard shell luggage, backpacks, garment bags and packing cubes. The brand launches in stores on Sunday and online Feb. 13. Retail Dive

Super influencer Huda Kattan is moving on from the Instagram-makeup aesthetic — at least when it comes to skin care. Launching with just one product, Kattan’s new skin-care brand, Wishful, is a far cry from the more-is-more vibe of her makeup offering, Huda Beauty. The point of this brand — her third — is simplicity. Wishful’s first product is the Yo Glow Enzyme Scrub, which is housed in a light yellow tube with holographic type. The scrub contains pineapple enzyme, papaya enzyme, alpha hydroxy acids and beta hydroxy acids, with the goal of providing glowing, even-toned skin. It was manufactured in South Korea. WWD 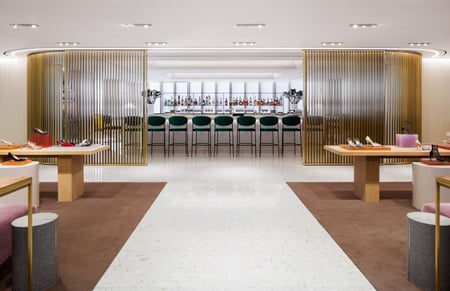 London-based architect Alex Cochrane has always had a soft spot in his heart for Holt Renfrew’s café nestled inside its famed Bloor Street flagship. “Fourteen years ago, I came to Toronto to ask my future father-in-law for his daughter’s hand in marriage,” said Cochrane. That man was W. Galen Weston — the chairman emeritus of George Weston Ltd., owner of Holt Renfrew as well as Selfridges Group in London. The daughter in question was Alannah Weston, chairman of Selfridges Group. WWD

Macy’s on Thursday will open what it calls a "flexible retail store format" at Southlake Town Square mall in Southlake, Texas, according to a press release emailed to Retail Dive. The 20,000-foot store will be called "Market by Macy’s." The new store's space will host "community-driven programming from cooking tutorials and book signings to crafting and fitness classes," for example. The location will also debut two new exclusive brands, Getchell’s Apothecary, a beauty shop "inspired by retail’s first female executive, Margaret Getchell," and a food and beverage concept, Herald, named for the department store’s New York City flagship at Herald Square. Retail Dive

In largest Expansion Yet, Sephora to Open 100 North American Stores in 2020

Sephora has begun its largest store expansion since the beauty player entered the North American market over 20 years ago, with plans to open 100 stores in the region in 2020, according to a company press release. The beauty retailer will more than double the number of store openings from the prior year, according to the release. In 2019, Sephora opened 110 new stores globally, according to financial documents from parent company LVMH. The expansion plans include opening stores in more than 75 cities, focusing on "local neighborhoods and community centers," including in Charlotte, North Carolina; Nashville, Tennessee; and San Jose, California. To accommodate that local focus, the retailer is also using a smaller 4,000 square-foot format for some of the stores to "more seamlessly integrate into street and local center locations." Retail Dive

Nike frequently stages brand moments for press and influencers. However, the unexpected runway element added impact and urgency. The event started with a traditional runway show featuring models wearing Nike’s latest collections — from boiler suits to flyaway skirts. It segued into a section spotlighting Olympic legends including Lisa Leslie, Carl Lewis, Brandi Chastain and Joan Benoit Samuelson, followed by Nike's current roster of "elite athletes," including some future Olympians. There was also a tribute to the late Kobe Bryant, whose jersey was worn by four young children, and a dance party. In an era when the runway show’s relevance is being tested, why did Nike’s attempt feel so impactful? BoF

Michael Kors owner Capri Holdings Ltd cut its full-year forecasts on Wednesday, citing a $100 million hit to revenue from the coronavirus outbreak in China as it closed 150 stores in one of the most important markets for luxury fashion labels. A rapidly growing upper-middle class has made China a critical market for luxury goods makers but uncertainty over the epidemic, which has killed more than 490 people, has forced many businesses to shut stores and factories. "While this global health emergency is expected to be temporary, the duration and intensity of the disruption is uncertain, including potential broader impact outside of China," Capri, which also owns Versace and Jimmy Choo, said in a statement. BoF

Everything Fashion Brands Need to Know About the Coronavirus

The coronavirus is adding to a multitude of risks burdening luxury groups, from ongoing US-China trade tensions and flash-points in the Middle East to mass protests taking place from Hong Kong to Paris. A new report from Fitch Solutions predicts a “contagion effect” to further hit Asian markets where Chinese tourists have traditionally buoyed luxury spending, including Macau, Singapore, Japan and Hong Kong, where measures requiring all travellers from mainland China to be quarantined for 14 days will take effect on February 8. BoF