Why a Plus-Size Online Retailer is Kicking Off Fashion Week 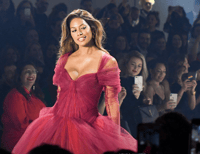 Laverne Cox does not want to get political. The actress had just twirled down — and up again — the runway at 11 Honoré’s first New York Fashion Week show in a billowy Zac Posen gown, size 10, to a raving audience. She shared the stage with nearly 40 models, donning labels such as Reem Acra and Marchesa, all in extended sizes, who together walked in the finale amid a shower of confetti. The audience cheered even louder. Still, backstage, Cox expresses a frustration. “It blew my mind that no one has been designing for these women, taking them into consideration as beautiful as they are,” she says. “These brands are leaving money on the table by not acknowledging this market.” BoF

The Department of Health and Mental Hygiene confirmed on Tuesday that it was ordering restaurants under its jurisdiction not to sell food products containing CBD. In a statement, the health department said that New York City eateries were not “permitted to add anything to food or drink that is not approved as safe to eat.” That included CBD, which had not been “deemed safe as a food additive,” the department said. NY Times

QVC introduced Q Anytime, a new shopping app with an "ever-changing" shoppable video content feed, and unveiled a new visual identity and logo, according to a company press release. Q Anytime, currently available as an iPhone app, is intended to complement the company's flagship app with a feed of shoppable videos, presented on demand in five to eight-minute segments. Customers can tap on a video to buy a product or get more details. Customers can also customize their feed by category or build a playlist by liking videos. Eventually, the company plans to offer original content, episodic series and other extras designed for a mobile audience through the Q Anytime app. Retail Dive

The pundits have been predicting strong results from the top performers in luxury fashion and Louis Vuitton did not disappoint, breezing past the 10 billion mark for annual sales and topping expectations for growth into the end of last year — a tumultuous time for many companies. As analysts emerge from a flurry of number crunching, evidence points to new levels of productivity and profitability from the star label of LVMH Moët Hennessy Louis Vuitton, reinforcing its dominant position. A higher concentration of sales in store spaces is proving key. WWD

Sofía Vergara: Denim for All in Walmart.com Deal

The “Modern Family” actress and walmart.com today revealed the launch of a nearly 100-piece collection, priced under $40, named Sofía Jeans by Sofía Vergara. The line includes denim, sized from 0-20, in silhouettes such as an ankle skinny along with high-waisted flares and joggers, some featuring stud work, embroidery and raw edges. That’s bolstered with denim skirts and jackets, graphic T-shirts and dolman sleeve tops with cutouts and side-lace detailing. Sizing on the tops runs from XS to 3XL. WWD

Flamingo, a women's body care brand launched by Harry's last year, is rolling out to all Target stores on Monday.
The brand, which says it is priced the same or less than comparable Harry's products, is offering razors, cartridge refills, body lotion, shave gel, body wax and face wax, Allie Melnick, General Manager of Flamingo, told Retail Dive in an email interview. The products will be merchandised in four feet of custom shelving "in a prominent way customers are more frequently used to seeing in the beauty section," according to the company's press materials. Retail Dive

Warby Parker unveiled a virtual try-on feature that allows mobile smartphone users to view how glasses look on them as they shop through the retailer's mobile app, according to a company Facebook post. The new Virtual Try-On capability was built on Apple's ARKit platform, uses the company's Face ID technology and True Depth camera function, and is currently available for users of the iPhone X or later iPhone models. Retail Dive

Clinique is diving into experimental retail with the opening of its first-ever pop-up on Feb. 7. The store will be dedicated to its new moisturizer product, Clinique iD. Clinique iD, which launched in December 2018, was created, in part, to seize on the surging customization trend, as well as bring renewed relevance to the 50-year-old brand. The 10-day pop-up, located in New York City’s SoHo neighborhood, serves as a way to continue that messaging. It will also be a test-bed for consumer experiences like virtual reality. Glossy