It was heralded as China’s answer to JPMorgan -- a homegrown financial giant on the cusp of the biggest stock-market debut the world has ever seen.Instead, with billions on the line and an initial public offering all but sealed, Chinese authorities have abruptly thrown into doubt the future of Ant Group Co. and its celebrated founder, the billionaire Jack Ma.Only days before the financial-technology juggernaut was to go public in Shanghai and Hong Kong -- a coup for China’s financial markets that once would have been unimaginable -- the $35 billion IPO was halted on Tuesday after Ma, China’s richest man, was summoned by regulators. In an extraordinary turn of events, authorities announced that they had belatedly discovered an array of shortcomings that, by some accounts, might require the sprawling Ant to be overhauled. Bloomberg

Amazon has officially started operations at its first European Amazon Air hub, based out of the Leipzig/Halle Airport in Germany. The new facility spans 20,000 square meters and will host two Amazon-branded Boeing 737-800 aircraft, bringing the company’s total operational air fleet to more than 70 aircraft.The retail giant says that the new hub will generate more than 200 jobs locally in the Leipzig area, where it already employs over 1,500 thanks to the presence of a large regional fulfilment center. Amazon also notes that this will help the company continue to offer timely delivery in Europe as the pandemic continues.Amazon has steadily grown its Air cargo logistics operations since debuting the expansion of its delivery and shipping network in 2016. It has regional air hubs at airports in Texas, Puerto Rico and Florida in the U.S., and plans to expand to San Bernardino International Airport in California and Cincinnati/Northern Kentucky International Airport in 2021. TechCrunch

Some of the luxury market’s biggest competitors are teaming up in a bid to dominate China’s booming online market for high-end watches, jewellery and fashion. On Thursday, Farfetch announced that it will form a new joint venture in China with tech-giant Alibaba. As part of the deal, Alibaba and Swiss luxury group Richemont have invested $300 million each in Farfetch, plus $250 million each in a new joint venture, Farfetch China. They’ll own a combined 25 percent stake in the new unit, with the option to acquire another 24 percent. The Pinault family, owner of French luxury conglomerate Kering, has also upped its current stake in Farfetch by an additional $50 million through its investment vehicle Artémis. The deal is a major sign of support for Farfetch, cementing the marketplace’s status as the leading player in the online luxury market. It also could mark the start of a long-awaited consolidation in the space, where numerous small and mid-sized websites compete for the same pool of wealthy consumers. The biggest loser in the deal could be Yoox Net-a-Porter Group, which has seen its owner (Richemont) and Chinese partner (Alibaba) invest in its biggest rival. On a call with reporters Friday morning, Richemont’s chairman, the South African billionaire Johann Rupert, said he had long hoped the luxury sector would move to a neutral, shared e-commerce platform where brands could maintain control of how their products are presented. BoF

In a normal, non-coronavirus year, Bloomingdale’s would host some 500 events at its 59th Street store — more than one a day. But with the pandemic forcing stores to close for months and shoppers reluctant to return when they did reopen, it required the marketing team to come up with an alternative. In the case of Bloomingdale’s, it’s called On Screen, a series of virtual events that are intended to mimic the “buzz and animation” the in-store events had evoked among customers, according to Kevin Harter, vice president of integrated marketing and the fashion office. “We had to quickly adapt this spring based on the environment and customer needs,” he said. “We knew the customer couldn’t come in and congregate so we wanted to find ways to translate [our events] to a more-digital experience.”The On Screen series kicked off in August and some one to two events are being held each week, Harter said. Among the events so far were a cooking demonstration where chef Antoni Porowski prepared a dish inspired by his latest capsule collection with J Brand; a Charlotte Tilbury masterclass; a comedy show that served as the kickoff event for the store’s Give Pink campaign; a “Knock Out Breast Cancer” fitness series with Rumble Boxing, and an exclusive preview of the David Yurman Lexington collection. WWD 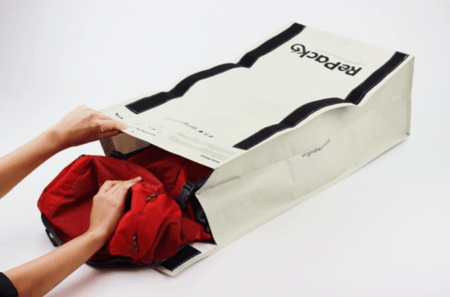 If you order a sweater or t-shirt from the clothing brand Eliou, you don’t have to get it in a plastic or cardboard mailer. Instead, you can choose to have it sent in a reusable package. When the shipment arrives, you take out the clothing, fold up the empty package, seal it with the included return label, and drop it in a mailbox to be sent back, cleaned, and used again. The company is one of the first in the U.S. to work with RePack, a Finland-based packaging company that aims to begin replacing standard cardboard boxes and plastic bubble mailers. RePack’s recycled plastic mailers—made from the same tough woven polypropylene as Ikea’s reusable shopping bags—are designed to have a lower carbon footprint than a typical box or bag as soon as they’re reused once. Fast Company