Why Supreme Sold to VF Corporation

VF Corporation, the parent company of Vans, Timberland and The North Face, has acquired the streetwear juggernaut Supreme in a deal that values the label at $2.1 billion. It’s the latest in a string of pandemic-era fashion deals, and one of the most significant acquisitions to hit the streetwear sector. VF is among the largest apparel groups in the world, and Supreme remains one of greatest success stories to come out of the mainstream collision of fashion and skate culture over the last decade. In an intensely challenging retail environment, VF is betting it can leverage its size and clout against Supreme’s brand to roughly double sales to $1 billion. “We see no upside limitation on the brand,” VF Corp. Chief Financial Officer Scott Roe told investors. “We see a clear line of sight to a billion dollars.” BoF

LG Electronics (LG) is joining hands with NET-A-PORTER, a leading online luxury fashion retailer, to offer a limited-edition line of gorgeous, environmentally responsible clothing made from high-quality, natural materials developed to last for years. Presented by LG and available exclusively at NET-A-PORTER, the capsule collections will be part of the NET SUSTAIN platform designed to help consumers live more sustainably and reduce the global problem of fashion waste, which the World Economic Forum estimates costing countries USD 400 billion a year. Webwire 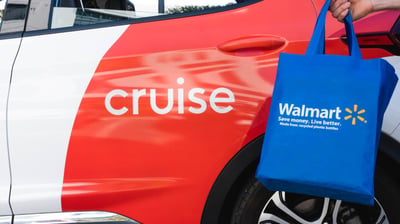 Starting next year, some of Walmart’s deliveries of groceries and other items will be dropped off at customers’ homes by a small fleet of electric-powered, driverless cars.The big-box retailer said Tuesday it will kick off a pilot program with General Motors’ all-electric vehicle subsidiary, Cruise. It did not disclose terms of the deal.Tom Ward, senior vice president of customer product of Walmart U.S., said customers who live near Scottsdale, Arizona, can place an order from their local store and have it delivered by one of Cruise’s cars. He said it could further two of the retailer’s goals: getting customers what they need quickly and moving a step closer to the company’s target of zero emissions by 2040. CNBC

J Brand, the premium denim brand owned by the Fast Retailing Group, is pivoting to a direct-to-consumer model. The brand, which has been sold in better department and specialty stores globally since its founding in 2005, will rely exclusively on direct distribution starting with the summer 2021 collection. “J Brand’s current business model is not aligned with the vision we have for its future. The change in direction will bring energy and focus back to a celebrated denim brand in what has become an increasingly saturated marketplace,” said Kazumi Yanai, chairman of J. Brand Inc. and group senior executive officer of Fast Retailing. The Los Angeles-headquartered Fast Retailing Jeans Innovation Center, which opened in 2016, will continue to innovate sustainable, next-generation denim development and support denim production for the group’s brands globally, including the future J Brand assortment. WWD

Nordstrom Ties Up With Casper to Sell Products in Stores, Online

While e-commerce has been the preferred channel of shopping for many since the pandemic began, Casper clearly still sees value in taking things offline. DTC brands increasingly have moved to enter physical retail — either through partnerships, pop-ups or owned stores — as marketing costs associated with customer acquisition become prohibitively high. Casper, a so-called darling in the direct-to-consumer space, pulled back the curtain into its finances when it filed to go public early this year, revealing that it spent $126.2 million on marketing expenses in 2018 — 35% of its revenue that year. While that percentage appears to be narrowing, it still proves the value in entering the physical market to cut costs.The mattress brand does operate more than 60 of its own stores, and earlier this year inked new retail partnerships with regional home players. But a partnership with Nordstrom may help Casper place its product in front of a new set of customers while providing a relatively low-risk way for it to enter new markets. RetailDive

Amazon today announced a set of new features aimed at making its Alexa devices more useful to aging adults. With the launch of “Care Hub,” an added option in the Alexa mobile app, family members can keep an eye on older parents and loved ones, with their permission, in order to receive general information about their activities and to be alerted if the loved one has called out for help. The idea behind Care Hub, the company explains, is to offer reassurance to family members concerned about an elderly member’s well-being, while also allowing those family members to maintain some independence. This is not a novel use case for Alexa devices. Already, the devices are being used in senior living centers and other care facilities, by way of third-party providers. TechCrunch

Target and Ulta Beauty announced a deal Tuesday to open makeup and skincare shops inside of hundreds of Target stores across the country. Target CEO Brian Cornell said starting in the second half of next year, shoppers will find a smaller version of an Ulta store in more than 100 of Target’s stores and on its website. Each “shop-in-shop” will be about 1,000 square feet with more than 40 beauty brands and a rotating assortment of products from hair care and fragrances to lip gloss. Customers can shop in person or use Target’s same-day services, such as curbside pickup or home delivery by Shipt, to get their online beauty purchases. Ulta will train Target employees as beauty consultants. Shares of Ulta were up about 7% to $265.49 at market close. Shares of Target were up about 2% to $158.07 at market close. CNBC

If you purchased a Peloton bike or treadmill to exercise with during the pandemic, you’ll soon have a new collection of classes to take from a familiar artist. This week, Peloton announced a multi-year partnership with cultural phenomenon Beyoncé — the artist will help curate classes for the fitness company’s subscription service, starting with a series of Homecoming-themed classes in honor of historically Black colleges and universities. Peloton says that Beyoncé is one of the most requested artists for its playlists. Based off the announcement, its unclear what Beyoncé’s “curation” entails, but if you’d like to see for yourself, Beyoncé-themed classes have already begun. There are meditations, outdoor runs, and bike rides scheduled for the remainder of this week and more classes to come. The Verge