Ascena Retail Group, which owns clothing brands such as Ann Taylor and Loft, said on Thursday it will be acquired by Premium Apparel LLC for $540 million on a cash-free and debt-free basis. Premium Apparel, a unit of private equity firm Sycamore Partners, has committed to retain a substantial portion of the retail stores and associates affiliated with the brands, Ascena said in a statement. Other brands under the Ascena Group, Lane Bryant and Lou & Grey, will also be part of Premium Apparel’s acquisition. The transaction is expected to be completed by mid-December, the statement said. Other Ascena assets — Catherines and Justice — have been already sold off. BoF

The Newcastle-based menswear retailer turned to Goldman Sachs to help it find a new investor, Sky news reports. The retailer is in talks with private equity firms including Cinven and General Atlantic Partners, sources told Sky. Christiaan Ashworth and John Parker founded End in 2005, garnering a following for its curated assortment of sportswear, sneakers and emerging labels. Today, End sells the likes of Heron Preston and 1017 ALYX 9SM alongside luxury names like Gucci and Valentino and sports brands including Nike, Adidas and Patagonia. End operates three flagship stores in Newcastle, Glasgow and London, alongside an e-commerce business that accounts for the vast majority of sales. In October 2018, the duo told BoF they were on track to hit $180 million in revenue by the end of the year, up from $35 million in 2015, adding that the business has always been profitable. Index Ventures, which has also invested in Farfetch and Net-a-Porter, took a minority stake in the retailer for an undisclosed sum in 2014. Ashworth and Parker own large minority stakes in the business, according to Sky. BoF 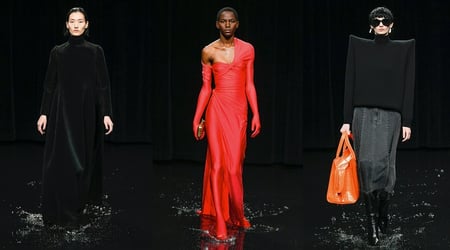 Balenciaga to Show Fall Collection Via Video Game in December

After showing its Summer 2020 collection with a music video, Kering-owned Balenciaga is turning to gaming. The video game called “Afterworld”, set to be released December 6, will present the brand’s Fall 2021 collection as well as offering players a chance to navigate an “allegorical adventure” set in 2031.In a statement Tuesday, the brand said it was “creating an in-depth look at the new collection and the projected future in which it is intended to be worn.” It’s worth noting that Balenciaga is showing its main runway line-up for next fall at a time of year when brands usually release more commercially-focused pre-fall collections. Kering stable-mates Gucci and Saint Laurent have also seized on disruptions related to the coronavirus pandemic as a chance to rethink their schedules for fashion shows and deliveries. BoF

Pinterest is getting into online events. The company has been spotted testing a new feature that allows users to sign up for Zoom classes through Pinterest, while creators use Pinterest’s class boards to organize class materials, notes and other resources, or even connect with attendees through a group chat option. The company confirmed the test of online classes is an experiment now in development, but wouldn’t offer further details about its plans. The feature itself was discovered on Tuesday by reverse engineer Jane Manchun Wong, who found details about the online classes by looking into the app’s code. TechCrunch

News that Salesforce is interested in buying Slack, the popular workplace chat company, sent shares of the smaller firm sharply higher today. Slack shares are up just under 25% at the moment, according to Yahoo Finance data. Slack is worth $36.95 per share as of the time of writing, valuing it at around $20.8 billion. The well-known former unicorn has been worth as little as $15.10 per share inside the last year and worth as much as $40.07. Inversely, shares of Salesforce are trading lower on the news, falling around 3.5% as of the time of writing. Investors in the San Francisco-based SaaS pioneer were either unimpressed at the combination idea, or perhaps worried about the price that would be required to bring the 2019 IPO into their fold. TechCrunch

The new organisation, which is made up of more than 50 prominent industry figures, is looking to address the fashion industry’s barriers to entry through a series of educational and financial resources.Working alongside brands and industry partners, Rubric initiative is organising outreach initiatives to level the playing field and help emerging creatives from Black, Asian and minority ethnic backgrounds break into the industry. The organisation will host publicly-accessible online seminars and talks with Rubric’s community members to demystify jobs in fashion, work with brands to help aspiring fashion professionals secure paid internships and entry-level opportunities, and collaborate with mentoring schemes to give access to emerging talent. BoF