Here's TRAUB's roundup of recent retail news. Sephora and Kohl's team up for long-term retail partnership, De Beers plans to clean up diamond supply chain and be carbon neutral by 2030, Under Armour launches a brand with NBA star Steph Curry to better compete with Nike's Jordan, and more. 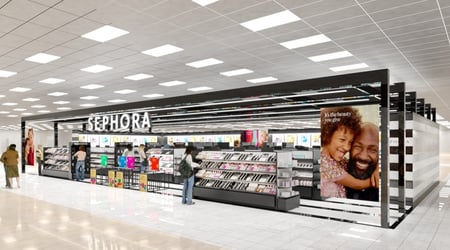 Sephora and Kohl’s Team Up for Long-Term Retail Partnership

Replacing Kohl’s existing beauty offering online and in-store, Sephora will open outposts in 200 Kohl’s stores in autumn 2021, with a view to expand to at least 850 locations by 2023. The shop-in-shops will be staffed by Sephora-trained sales advisors and stock an edit of over 100 brands. The announcement follows news of a similar tie-up between Target and Ulta in November, as big-box essential retailers become strategic distribution networks for the beauty and personal care market. This isn’t Sephora’s first long-term retail partnership: since 2009, the beauty store has had a deal with JC Penney, which is just emerging from bankruptcy with plans to close hundreds of stores. BoF

Amazon is testing a new feature for its iOS Alexa app: the ability to type out Alexa commands, instead of having to ask questions or requests by speaking out loud. “Type with Alexa is a Public Preview feature available to iOS Alexa app customers allowing you to interact with Alexa without using voice, meaning everything you can currently say to Alexa can now also be typed using your Alexa mobile app. Type with Alexa is available to iOS customers in the U.S.,” said an Amazon spokesperson. The Verge

De Beers Plans To Clean up Diamond Supply Chain, Be Carbon Neutral by 2030

Diamond mining giant De Beers on Monday outlined plans to ethically source its diamonds and be carbon neutral by 2030 due to growing investor pressure on companies to be environmentally and socially responsible. The initiative is the latest example of a miner setting sustainability goals in an industry blamed for depletion of natural resources, smuggling and child labor in supply lines. De Beers, a unit of Anglo American, said it would provide the origin and impact of every diamond it discovers and sells, while also extending a set of ethical, social and environmental standards beyond its value chain and across diamond mining as well as other sectors. BoF

Under Armour announced Monday the launch of the Curry Brand with NBA star Stephen Curry, a long-time Under Armour athlete, in a bid to reach younger consumers and compete with Nike and its Jordan Brand.The new line, which launches on CurryBrand.com this week, features shoes and clothes for a number of sports including basketball and golf. Over time, the brand will be expanded to more categories including running and women’s. Performance basketball footwear will be available on Dec. 11, in time for holiday gift giving. CNBC

LVMH’s chief digital officer Ian Rogers is stepping down. To help fill the gap, the luxury giant is creating a “chief omnichannel officer” role at the group level, elevating Louis Vuitton vice president Michael David to the position, according to an internal announcement obtained by BoF. Rogers, a former Apple Music executive who joined the group in 2015, is leaving his position to become chief experience officer at cryptocurrency start-up Ledger. He is set to maintain an advisory role at LVMH and will continue to host their innovation prize. The shakeup comes as online luxury sales surge due to intermittent store closures since the coronavirus pandemic. For boutiques that remain open, online support features such as providing information about items’ availability, click-and-collect ordering and payments, or booking appointments to try on products have become key to driving traffic. BoF

Tokyo-based Rakuten started off in 1997 as an online marketplace but has since sprawled in Amazon-like fashion, moving successfully into fields like travel, payment and banking. But when its chief executive Mickey Mikitani told his CEO friends that he planned to take Rakuten into the telecom industry, they warned him we would fail.The business is brutally competitive, Mikitani's friends told him, and requires vast amounts of capital. Nonetheless, Rakuten believes it's found a way to overcome these formidable obstacles. Fortune

The retail group owned by billionaire businessman Mike Ashley said it had offered its struggling rival an emergency loan of up to £50 million ($66 million), amid reports that Arcadia could enter administration Monday. Frasers Group, which owns companies including Flannels, Sports Direct and Jack Wills, also said it had an eye on an acquisition if Arcadia does collapse. Though Arcadia has seen its sales plummet during the UK’s second lockdown ending this week, it has been struggling for years, one of many retailers to suffer from the rapid rise of nimble digital rivals. It began working to restructure operations in 2019. The group’s collapse would put 13,000 jobs at risk, while a shortfall in its pension scheme means thousands of employees could suffer cuts in their retirement income. BoF