Mytheresa, the Munich-based online luxury retailer, began its first day of trading with a $2.2 billion valuation Thursday, following an initial public offering that exceeded its target. The company sold shares for $26 dollar each, well above the original $16 to $18 range, in a sign of strong investor demand. Investors have reason to be feeling bullish: worldwide online sales of luxury goods surged by 50 percent in 2020, according to consultancy Bain, as the coronavirus pandemic drove wealthy shoppers to the web. While luxury spending is expected to shift back to physical retail somewhat after the pandemic, customers are unlikely to unlearn the digital behaviours they adopted under lockdown. That’s fuelled enthusiasm for the online luxury space: competitor Farfetch’s stock has soared over the past year, buoyed in part by a $1.15 billion deal with Swiss luxury group Richemont and Chinese tech and retail giant Alibaba. Amid high interest in consumer IPOs, shares of online fashion reseller Poshmark jumped in the hours after its January debut. BoF

The H&M-owned brand is partnering with Circos, a multi-brand kids’ and maternity clothing rental subscription site based in Amsterdam. Customers in Europe can order individual pieces or “edited bundles,” with monthly subscriptions starting at €19.50 and full flexibility in when to return items. Childrenswear has been a resilient category for some retailers over the last year and, although not on par with the resale boom, the rental model hasn’t completely lost momentum despite an uncertain future at the start of the pandemic. In August, Ganni and Levi’s collaborated on a rental-only capsule collection and Selfridges partnered with platform Hurr to offer 100 items from over 40 brands for hire. BoF

Why More Startups And VCs Are Finally Pursuing the Menopause Market: ‘$600B Is Not ‘Niche’’

In the field of women’s health, much of the medical advancement until now has been focused on birth control and fertility treatments, but startups and venture capitalists are increasingly turning to menopause as an area ripe for innovation. By 2025, 1.1 billion women are expected to be postmenopausal. The space represents $600 billion of spending opportunity but is still largely untapped by startups and brands that could be creating new products and services for these women, according to data from early-stage investing firm Female Founders Fund. “Only 5 percent of femtech startups address menopause, and overall the opportunity is huge,” Adrianna Samaniego, investor with Female Founders Fund, told Crunchbase News. “Fertility is nine months, typically, but menopause can last anywhere from four to 30 years.” Crunchbase

Renzo Rosso’s Italian apparel group is doing due diligence on a potential acquisition of German fashion house Jil Sander, a spokesperson for OTB Group said Tuesday, confirming a report by Italian newspaper Corriere della Sera. OTB, which already owns Diesel, Marni and Maison Margiela, had said in a December statement that it was once again on the hunt for new assets. “We want to increase our critical mass and we want to do it in a modern and sustainable way, first of all supporting and strengthening the pipeline, and in general Made in Italy,” the company said. Jil Sander is currently owned by the Japanese apparel company Onward Holdings Ltd., which acquired the brand at an equity value of €167 million in 2008. BoF 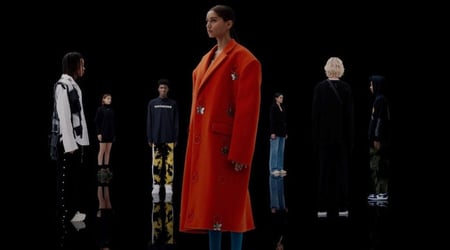 The sneaker reseller said it would spend the cash injection (an undisclosed sum) to accelerate growth, double down on its apparel and accessories offering and expand into new categories. Funding from Artémis, the investment vehicle of Kering chief executive François-Henri Pinault, bolsters Goat’s existing relationship with the luxury group; some of its brands, including Alexander McQueen and Balenciaga, already have direct partnerships with the resale site. Goat is currently valued at $1.75 billion after it raised $100 million in a Series E funding round in September 2020. BoF

What Fashion Wants From a Biden Presidency

It was the White House that catapulted Prabal Gurung’s label into mainstream American fashion, just shy of a decade ago. First Lady Michelle Obama had worn a twill dress from his Spring 2010 collection to an event at the National Museum of American History. Two months later, she donned one of Gurung’s custom creations — a red draped gown — to the White House Correspondents’ Dinner. The Trump years have afforded fewer opportunities. Most major American designers, including Gurung, have steered clear of Washington since 2017. Some made their disapproval of the Trump administration’s policies clear, while others feared a consumer backlash if Melania Trump was spotted wearing their brand. BoF