Coty Inc said on Wednesday it would close its manufacturing site in Cologne, Germany as a part of the cosmetics and makeup company’s efforts to consolidate its fragrance operations. The company last year announced a plan to cut costs, improve supply chain and reduce debt, which came as the Covid-19 pandemic kept salons and department stores, where its products are sold, shut. “Our network has been operating over-capacity in recent years and the considerable impact of Covid-19 has accelerated the need to take action,” said Richard Jones, global chief supply officer. The changes are expected to bring annual net savings for Coty. BoF 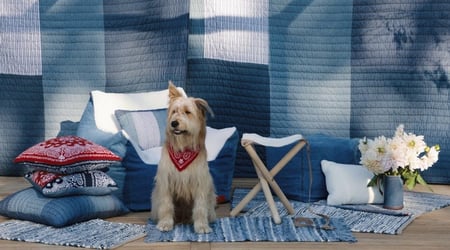 The jeans maker will launch over 100 limited denim-inspired items spanning kitchenware, apparel and pet accessories on the mass market retailer’s online channels beginning February 28, CNBC reported. With apparel sales down and department stores struggling, the move sees Levi’s dip its toes into home goods while linking arms with a retailer that has fared comparatively well in the wake of Covid-19. Target, which has stayed open through lockdowns as an essential retailer, grew its online business significantly and saw its shares rise 64 percent during 2020. The big-box retailer already has a number of designer collaborations in its books, including capsules with Rodarte, Jason Wu and Tory Burch. But Levi’s isn’t the only denim brand tapping into interiors: just this week, Wrangler announced a collaboration with Pottery Barn Teen featuring sheets, pillow cases and rugs. BoF

The SPAC craze rippling across Wall Street has largely left out women. But one group of female founders and investors is looking to change that. A special purpose acquisition company, or SPAC, called Powered Brands priced earlier this month on the Nasdaq, under the ticker “POWRU,” with the goal of creating a new kind of global conglomerate made up of sustainable and digitally focused beauty brands. Powered Brands was founded by serial entrepreneur Katherine Power, who has launched a number of beauty and wine brands, and Dana Settle, founding partner at venture capital firm Greycroft. Its bench of female executives and investors makes it one of the very few SPACS to be founded and funded by women. Power also currently serves as chief executive of Clique Brands, a global media and consumer brands company that she co-founded in 2007, which owns among other things the trendy fashion site for women called Who What Wear. CNBC

When Melodie van der Baan was a sales rep for fashion brands, she would keep her specialty retail accounts happy by helping them reorder sold-out items, or get rid of unpopular styles. She learned that one boutique’s must-have often is another store’s markdown, so she would act as a merchandise matchmaker, getting goods from one authorized retailer to another. “If a brand didn’t have a reorder that a store wanted, I would say I know a store that’s sitting on it, let’s call them,” she said. After she opened her own women’s clothing boutique in 2012, she saw firsthand the need for a solution that would help small clothing stores, while leveraging, and protecting, a brand’s network of authorized retailers, Van der Baan and her co-founder, Morgan Bodstrom, have created a platform, SwapRetail, that could prove to be a lifeline for independent clothing stores at a time when, more than ever, they need new tools to survive. Forbes

The reports that Hudson’s Bay Co. is planning to split its online and brick-and-mortar operations into two companies, and then take Saks.com public, immediately strikes me as one of the dumbest strategic decisions I have heard in a long, long time.If we have learned anything from the past two decades of retail disruption, it’s that notions of separate physical and digital shopping behavior are increasingly distinctions without a difference. The lines are blurring. Digital drives brick and mortar and vice versa. Indeed, the customer is the channel and retailers with a more harmonized and remarkable retail experience generally outperform those that have failed to break down silos. Having worked in this area—as a C-suite executive at two large retailers and subsequently as a consultant and analyst—for more than 20 years, I can confidently say this goes against what we know shoppers want, what drives operational efficiency and what is central to growing customer lifetime value. Forbes

How DTC Brands Will Approach Physical Retail in 2021

The unique circumstances of the pandemic have caused online sales to balloon, seemingly overnight. As retailers were forced last spring to temporarily shutter their stores, either by choice or by government mandate, consumers shifted their spending online. E-commerce sales in March jumped to $70.1 billion from $61.7 billion in February, and were up 18.2% from the prior year, according to the Department of Commerce. As a result, retailers across the industry adjusted their strategies to meet the increased demand to their digital channels. Several ramped up fulfillment options, like curbside and in-store pickup. At Home piloted buy online, pick up in store at 28 stores in January with a gradual rollout to other markets throughout the year. In response to more sales happening online, though, the retailer expedited those plans in order to serve its customers. Target's same-day services — pick up, drive up and Shipt — helped drive record growth over the year. And Lowe's in September announced it would introduce pickup lockers to most metro areas by the Thanksgiving holiday. Retail Dive

It's been another weird week in retail. American Airlines launched a wine club, White Castle announced plans to offer a carhop service this Valentine's Day and Costco added a signed Babe Ruth baseball to its product offering.This, and more, in this week's retail therapy. The airline industry has been especially hard-hit this past year as the pandemic halted most nonessential travel. And with trips being canceled, one would think travelers would solely miss their destinations — be it big cities or tropical paradises. But we shouldn't rule out the unlikely hero of travel: the airplane. Months grounded have turned some consumers nostalgic to the aircraft's little charms, like prepackaged meals, seat-back tray tables and screaming toddlers (OK maybe not that last one). Retail Dive