Mytheresa to launch WeChat game ahead of Chinese New Year

Luxury e-tailer Mytheresa is launching a game dedicated to the Chinese market ahead of the country’s New Year celebrations next month. The game, called ‘Mytheresa Style Flight’, allows players to virtually travel and pack a dream suitcase from the comfort of their own home. It comes ahead of Chinese New Year, celebrated on 12 February, which this year will be marred by tight travel restrictions. Available on Chinese messaging app WeChat from 29 January, the game sees players en route to destinations like Paris, Rome, Zermatt and the Maldives virtually dress their custom avatars using a curated edit of garments from luxury brands. On arrival, players snap shots of their avatars wearing custom outfits in their chosen destination, which can then be shared and added to their WeChat moments. Once the game is completed, users receive a discount code which they can use to purchase real-life garments. All products featured in the game are shoppable on Mytheresa and directly linked to the website. Fashion United

How to Sell Skin Care at Every Price

When it came to shopping in 2020, when much of the world’s global population was homebound during the pandemic, the year may be best remembered for the jump in popularity in sweatpants. But few categories were as resilient last year as skin care. Facial creams and oils had already eclipsed foundation and mascara in popularity in recent years, and now with fewer public engagements to justify eyeshadows and lipsticks, public fascination with smoothing wrinkles and erasing pimples has only intensified. For the uninitiated, there had never been so many online forums and “skinfluencers,” or amateur experts with large digital followings, to turn to for advice and recommendations. Skin care is now the largest business within beauty, representing 30 percent of the global market in 2019, according to McKinsey & Company, growing 6.4 percent year-over-year in 2019 to $140 billion globally, according to Euromonitor. But brands that want a slice of those sales are having to radically adjust their pitch to consumers. Aspirational language — think Olay’s “because younger-looking eyes never go out of fashion” campaign from a decade ago — is out, and technical-sounding jargon is in. BoF

Britain will introduce rules for buy-now pay-later (BNPL) credit after the unregulated market surged during the coronavirus pandemic lockdown, the UK’s finance ministry said on Tuesday. BNPL are interest-free short-term loans that spread the payment for retail goods, and are often used as an alternative to credit cards. “Buy-now-pay-later can be a helpful way to manage your finances but it’s important that consumers are protected as these agreements become more popular,” financial services minister John Glen said in a statement. Legislation will be brought in as soon as parliamentary time allows to require providers to make affordability checks before lending to a customer, he said. “By stepping in and regulating, we’re making sure people are treated fairly and only offered agreements they can afford — the same protections you’d expect with other loans.” Glen was responding to a review on the unsecured credit market by former Financial Conduct Authority interim chief executive Christopher Woolard that was also published on Tuesday. BoF

Hudson's Bay is preparing to enter into the crowded marketplace space. The retailer, a sister company to Saks Fifth Avenue and Saks Off 5th, said the marketplace initiative is part of its "digital-first strategic evolution," and is inviting large and small businesses to become a part of its seller community. Vendors must fill out an application to be considered for the program and answer questions about whether they ship to Canada, sell on other marketplaces or are BIPOC-owned or designed, and how many retailers currently carry their brand.Marketplaces have become an imperative line of revenue for many large retailers, which can collect commissions and fees from their sellers. Amazon this week revealed that its marketplace played a large role in its fourth quarter, with independent sellers landing 50% year-over-year sales growth. Tthose small businesses notched $4.8 billion in sales between Black Friday and Cyber Monday — up 60% from the year prior. Nearly 60% of products sold on the Amazon site come from third parties. Retail Dive

It’s time for a reality check. The coronavirus pandemic accelerated the adoption of ghost kitchens and the creation of virtual brands. Both were seen as potential fixes for restaurants caught in a highly unusual predicament. Some eateries were coping with surging delivery orders, while others were looking a lifeline as government restrictions clamped down on dining capacity and slashed sales. But these once-creative solutions have been replicated too many times, at times, diluting their effectiveness. Ghost kitchens, which are also known as cloud or dark kitchens, allow restaurants to prepare food solely for delivery. This can be critical for businesses seeing strong demand as consumers’ appetite for food delivery grows. Third-party food delivery sales grew 138% in December, according to analytics firm Second Measure. Start-ups like Kitchen United or Travis Kalanick’s CloudKitchens house multiple restaurant brands within one location and tout their models as more efficient, lowering labor and rent costs for eateries. Meanwhile, virtual restaurant brands are found only on third-party delivery apps, relying on those platforms for marketing rather than a physical storefront. Food from these brands is made either in a traditional restaurant kitchen or in a dark kitchen. For some struggling or failing restaurants, virtual brands have turned out to be lifesaver. CNBC 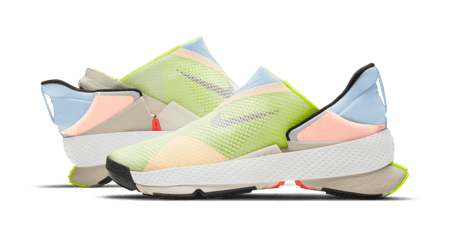 Nike taps the comfort trend with the launch of Go FlyEase, a no-lace slip-on sneaker

Nike is unveiling its first pair of slip-on sneakers without laces, hoping to enjoy some of the same momentum that rivals like Crocs and Vans have seen during the pandemic, as more consumers gravitate toward comfortable, no-fuss footwear. The “Go FlyEase” shoe is marketed as not requiring hands to put on and take off. The company said it was inspired in part by Asian cultures, where it’s customary to remove shoes before entering a home. The debut also comes at a time when people are more conscious of not touching dirty surfaces, like the bottom of shoes. “This shoe really responds to our current-day situation living in these Covid times,” Sarah Reinertsen, manager of FlyEase Innovation at Nike, said in an interview. “This is actually an innovation that has been cooking up in our innovation kitchen for a little while ... but it just came out right at the right time, when we needed it more than ever.” CNBC

Ukraine Fashion Week kicks off on February 5 for its four-day run, but instead of a fall/winter event will be showing season-less collections in what it is calling a “no season” fashion week. The event, which will see shows broadcast via local tech platform, includes 28 shows from local designer labels such as Lem, Artisinal By Litkovskaya and Roussin. BoF