YouTube will introduce a short-form video feature called Shorts to the US in March, making its biggest move yet to respond to the growing challenge from TikTok. Americans will be able to use a preliminary version of Shorts while the company, owned by Alphabet Inc.’s Google, continues developing the feature, YouTube said Wednesday in a blog post. Shorts lets users create and upload 15-second videos, the length of an average video on ByteDance Ltd.’s TikTok. YouTube has been testing the feature in India since September, and said the videos are now being watched more than 3.5 billion times a day in the country, which is its largest market. TikTok’s surge in popularity during the coronavirus pandemic has forced other social media companies to adjust their strategy and come up with similar products. Facebook Inc.’s Instagram debuted Reels, while Snap Inc. introduced Snapchat’s Spotlight and YouTube unveiled Shorts. BoF

Big Hit Entertainment, the South Korean company that brought BTS to the world, and Universal Music Group today announced an expanded strategic partnership that will see the two companies working together to “increase opportunities for artists through innovation and technology, whilst expanding the global reach of K-pop music and culture around the world,” according the announcement. The partnership includes a newly created label that will operate from Los Angeles and will work closely alongside teams from Big Hit America, Geffen Records and UMG to launch this project. Artists on UMG — the world’s largest music company — will explore enhanced “direct to fan” communications through Big Hit’s Weverse, a community-based platform that allows loyal artist fans to engage and interact, see and hear new content and purchase new products. Weverse is already being utilized by UMG artists Gracie Abrams, New Hope Club and Alexander 23, with Yungblud amongst the next wave of talent joining Weverse in the coming months. This follows the announcement last week that UMG has become an equity investor alongside Big Hit, YG Entertainment and Kiswe in KBYK’s VenewLive premium live streaming platform. Variety

Former UniCredit boss Jean-Pierre Mustier is teaming up with France’s richest man Bernard Arnault to launch a special purpose acquisition company (SPAC) aimed at European financial deals, as a boom in blank cheque vehicles spreads from the United States. French investment firm Tikehau Capital SCA is sponsoring the SPAC alongside Mustier, Financiere Agache, a group belonging to Arnault, as well as banker Diego De Giorgi, formerly of UniCredit and Bank of America Merrill Lynch. The four of them will be equal partners in the venture, sources familiar with the situation said. The SPAC will be listed in Amsterdam, and is the first of several being planned by this group. BoF

Ralph Lauren and Coach are among the brands that are doubling down on the luxury shopping destination of Hainan, China. The tropical island is expected to benefit from domestic travel at a time when most Chinese consumers are unable to shop abroad due to the pandemic. Ralph Lauren Chief Executive Patrice Louvet described Hainan Island as a “strategic priority” and said the brand is planning to open a store in 2021 alongside the three stores it already operates, according to South China Morning Post. Coach, which currently has two stores in Hainan, is also planning to expand its presence with two more duty-free shops. European players also continue to invest in the island. Swiss duty-free giant Dufry inked a strategic partnership with state-owned Hainan Development Holdings, for a store in the Hainanese capital Haikou’s Mova Mall. LVMH-owned DFS Group and partner Shenzhen Duty Free Group recently unveiled the first phase of their new downtown duty free shopping complex in Haikou Mission Hills, one of the island’s many resorts. BoF

Adidas first openly teased the idea of putting Reebok on the market in December, after reports that the sports apparel and footwear giant might sell the brand, which Adidas acquired in 2006. Since 2016, which followed a year of anemic sales growth for Reebok, the company has been working to re-energize the brand and its business performance. In announcing its divestment plans, Adidas declared victory in that effort. "As a result of the successful implementation of the turnaround plan 'Muscle Up' initiated in 2016, the brand was able to significantly improve its growth and profitability prospects, laying the foundation to unleash its full potential in the highly attractive global sporting goods market," the company said in the release. Reebok returned to positive sales growth in 2019, and its profitability improved as well. Sales, however, fell again in 2020 amid the coronavirus pandemic. The Adidas brand, which in past years has brought in more than 10 times the sales than Reebok, fell as well but by a smaller margin than Reebok. Retail Dive

The American Designer Betting on OnlyFans

Rebecca Minkoff, the designer known for her $300 leather crossbody handbags, has nearly one million followers on Instagram. On her profile, she shares a mélange of photos and videos, including product images from the brand’s latest accessory or fragrance launch, interviews with actresses and fashion insiders and on occasion, cheeky quotes. But for those seeking more, Minkoff is now offering a premium content experience to her followers and customers. Today, the American accessories maven launches an OnlyFans account, making her the first well-known designer to do so. The debut is tied to New York Fashion Week, and to kick things off, Minkoff will share behind-the-scenes looks at her brand’s upcoming collection, as well as content focused on being an entrepreneur in fashion. “As a company, we always want to be a part of emerging platforms to better connect with our customers,” Minkoff told BoF in an email. “Joining OnlyFans offers a new way for us to leverage our loyal fanbase as a brand and provide exclusive content that otherwise may not be available on other platforms.” For the uninitiated, OnlyFans is a subscription-based platform where individuals who sign up have the option charge users to view their content behind a paywall. (Tips are welcome.) The platform, which launched in 2016, has 100 million registered users, it told BoF, one million of whom are “creators.” Bloomberg called it a “billion-dollar media giant hiding in plain sight.” That’s still a small number compared to TikTok, which is reported to have as many as 800 million users globally, and Instagram, which has grown to over a billion users worldwide. Still, OnlyFans growth is rapid: The company said it has grown from 17 million users in December 2019 and is currently gaining 500,000 users per day. BoF 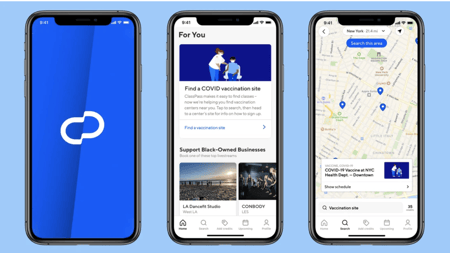 On Wednesday, people looking for information about where they or their loved ones can get a coronavirus vaccine can turn to a somewhat surprising tool: ClassPass. The New York company that’s best known for connecting subscribers with fitness classes near them is now using its technology to aggregate information about where the vaccine is being offered. The information is available through the ClassPass smartphone app and its website, with details about vaccination sites visible on an interactive map. Jeff Bladt, ClassPass’s vice president of pricing and inventory, says the effort came after he and others in the company struggled to help older relatives find vaccination spots near them. “It was frustratingly horrible to do so,” he says. There is still no comprehensive government database of who’s eligible to get the vaccine at which sites and where it’s actually available. With the dearth of easily accessible official information, the vaccine rollout has faced repeated criticism that it favors people with the time, internet connections, and digital savvy to search out doses and appointments. Fast Company