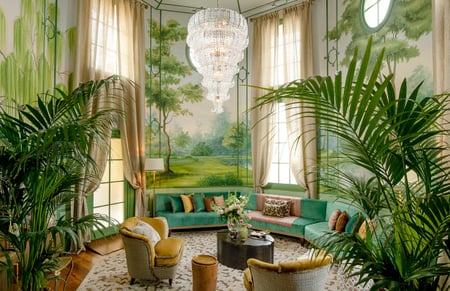 "The [hospitality] Apartment at Fidenza Village is one way to escape the cabin fever we are all feeling,” according to Desirée Bollier, chair and chief merchant officer of Value Retail, which operates the Italian luxury outlet. Fidenza Village, one of the 11 Villages of “The Bicester Village Shopping Collection” by Value Retail, has been going through a sort of “reinvention” during the lockdown, all to better service its customers, Bollier explained. “There is one thing about Value Retail — our relentless dissatisfaction. It’s constant, it’s in our DNA, and when COVID-19 hit us, we thought, there are things we cannot do but there are certainly things we can do,” Bollier said. “And in the can do, how do we reinvent ourselves during the lockdown?” Bollier also underscored the importance of further developing the relations and partnerships with the brands, working to understand their needs. “We waived all charges, there were no discussions or argumentations, they paid no rents. That is the normal thing to do, because our philosophy is if we are partners in good times, we are partners in bad times, and we reinforced the partnerships with our brands, building a very strong trust,” she said. WWD

After helping luxury brands to see the business opportunity in resale, The RealReal now wants to shift the industry’s views on scraps. Next month, the company is rolling out ReCollection, a programme that transforms damaged or distressed garments into new luxury pieces. The first collection will launch 1 April with clothing provided by eight designers: Stella McCartney, Balenciaga, A-Cold-Wall, Dries Van Noten, Jacquemus, Simone Rocha, Ulla Johnson and Zero + Maria Cornejo. The second collection, featuring upcycled loungewear, will be released later in April. The goal is to keep more clothing out of the waste stream, as well as have a more meaningful environmental impact by prioritising quality and longevity. Vogue Business

Benefiting from heightened demand in the pet category, Chewy reported fourth quarter net sales increased 51% to $2.04 billion. The online pet retailer made its first quarterly profit, reporting net income increased 135% year over year to $21 million from a net loss of $60.9 million last year, according to a company press release. For the full year, Chewy's net sales saw a 47% year-over-year increase to $7.2 billion, while its net loss narrowed to $92.5 million from $252.4 million in the year-ago period. Retail Dive

The Return of Rental

Within hours of the UK government’s announcement that lockdown restrictions would lift on June 21, Hurr, a London-based apparel rental company saw its website traffic surge — and it hasn’t stopped since. Its revenue tripled in February, when the announcement was made, compared to the month prior, and the fashion startup said it expects sales to double again in March as consumers secure an outfit from Hurr’s 7,500 rental options, such as a Nanushka dress or a Jacquemus handbag, in anticipation of their first restaurant excursion or dinner party. With the pandemic’s end in sight, rental retailers are optimistic about recovery. After a tough 2020, Rent the Runway chief executive Jennifer Hyman told BoF the company’s number of active customers is on track to exceed 2019 figures by the end of the year, and currently has about 50 jobs open. Nuuly, the rental service operated by Urban Outfitters, echoed that new subscribers are on the rise in recent weeks. BoF

SK-II Gets Into the Movie Business

Prestige skincare brand SK-II has released the first film made at its new Singapore-based movie studio, a documentary from Japanese director Hirokazu Koreeda about swimmer, Rikako Ikee’s return to competition following a battle with leukaemia. The studio will act as a content hub that it says will be dedicated to tackling social pressures impacting women today through film and storytelling, something SK-II has proven effective at in the past with marketing campaigns and content related to similar topics. This first film, “The Centre Lane” is one of eight films the studio plans to release this year, all related to the topic of changing one’s destiny. It’s now available on YouTube. “It is no longer about selling products, creating ads and driving promotions but engaging [female consumers],” said SK-II chief executive of global, Sandeep Seth, who is also charged with heading up the new SK-II Studio project. BoF

When Warby Parker and Dollar Shave Club entered the market in 2010 and 2011, respectively, the so-called first class of DTC darlings was born. It was a time when 148.1 million U.S. consumers were making purchases online, and U.S. e-commerce sales reached $301.69 billion, according to eMarketer. DTC was almost "a synonym for the internet," said Emmett Shine, co-founder of multi-brand consumer goods company Pattern (formerly branding agency Gin Lane). In the decade since, consumer appetite for buying online and through direct-to-consumer models hasn't slowed down. In 2020, e-commerce soared to $795 billion, up 32.4% year over year, according to eMarketer data. Retail Dive