Gap Inc. is selling the multi-brand retailer Intermix, the latest move by the retailer to prune its portfolio in order to focus on reviving its struggling namesake brand.The American boutique chain, which came to prominence in the 2000s at the height of the contemporary fashion market’s influence, has been acquired by Altamont Capital Partners, a Bay Area-based private equity firm with more than $2.5 billion invested across a variety of categories, including apparel. Gap has been closing or offloading its smaller lines after deciding against a spinoff of its most successful asset, Old Navy, in early 2020. Hill City, a menswear label, was shut down last year, and the childrenswear brand Janie and Jack was sold to Go Global Retail in March 2021. The company announced early this year that it conducted a “strategic review” of the Intermix business in late 2020 — incurring a $56 million impairment charge. The group’s European business is also under review. BoF

Miu Miu and Levi’s Team Up to Create Upcycled Collection

Few fashion items are as enduring as Levi Strauss & Co.’s original blue jean, trademarked in 1873. After 148 years, the durable pant, now known as the 501 style, remains an indispensable wardrobe staple. Part of its appeal, beyond the comfortable and flattering fit, is that it gets better with age. Preworn Levi’s are often the most covetable, already creased and softened. Crafty repairs to distressed pairs, like patches and pins, can also double as decoration, only making them more desirable. Next month as part of the ongoing Upcycled by Miu Miu project, the Italian fashion brand will release a capsule featuring Levi’s men’s 501s and trucker jackets from the 1980s and 1990s, sourced from Levi’s own archive and retooled with Miu Miu’s signature touch. The collaboration will be limited to 1,000 pieces in three silhouettes, hand-embellished with crystals, pearls, diamanté embroideries and leather intarsia. The Upcycled project, which first launched in December 2020 with a collection of 80 vintage dresses given a bespoke treatment by Miu Miu, aims to extend the lifespan of preworn garments by refashioning them for the modern woman. WSJ

The British department store is expanding a service it first introduced in-store last year in partnership with rental platform HURR Collective. Selfridges Rental will launch online on May 7, giving shoppers access to a curated selection of new season womenswear, menswear and accessories available to rent for up to 20 days. The edit will include pieces from Jacquemus, Ganni, Off-White and Dries van Noten; prices for a four-day rental will begin at £20 (around $28). The move comes as lockdown restrictions in the UK ease, with many retail analysts projecting an upsurge in demand for categories such as occasion wear, a core offering for most rental players. Selfridges partnered with HURR to launch in-store rental services last year as a part of Project Earth, its five-year sustainability plan that also included a pre-loved fashion selection, beauty packaging recycling and an in-store product repair concierge. BoF

The Met Gala is making a comeback and Condé Nast is looking to the event’s red carpet when it comes to trying to get advertiser dollars. The publisher, which was hit hard by the coronavirus crisis as more advertisers walked away from already struggling print, is attempting to monetize other parts of the business and is eyeing live events such as the Met Gala and the Vanity Fair Oscars party. In the case of the Met Gala, E! has dominated the coverage of its glitzy red carpet, but now Vogue — which has long cohosted the star-studded event as Condé Nast has been one of the main sponsors for years — is hoping to take control with new live programming, from the final fittings and last-minute looks to the red carpet, offering audiences exclusive behind-the-scenes access. WWD

The LVMH-owned brand’s Fendi Casa line will relaunch as a joint venture with Design Holding, the Italian design group whose other products include Flos lighting and B&B Italia sofas. Silvia Venturini Fendi will provide “creative guidance” to the project, which is set to be revealed during Milan’s Salone del Mobile design show next January, , the brand said in a statement, Design Holding, whose backers include Carlyle Group and Investindustrial, will be the line’s majority shareholder. The move comes as more brands seek to increase their presence in homeware, which has enjoyed a pandemic bump in spending. The loss of the Fendi Casa license marks the end of an era for its current producer, Luxury Living, whose founder Alberto Vignatelli spearheaded the fashion industry’s expansion into licensed furniture in the late 1980s. Vignatelli passed away in 2017, and his company was recently sold to Lifestyle Design Group (the rival Italian furniture group formerly known as Poltrona Frau). BoF

The world's biggest jeweller, Pandora, says it will no longer sell mined diamonds and will switch to exclusively laboratory-made diamonds. Concerns about the environment and working practices in the mining industry have led to growing demand for alternatives to mined diamonds. Pandora's chief executive, Alexander Lacik, told the BBC the change was part of a broader sustainability drive. He said the firm was pursuing it because "it's the right thing to do". They are also cheaper: "We can essentially create the same outcome as nature has created, but at a very, very different price." Mr Lacik explains they can be made for as little as "a third of what it is for something that we've dug up from the ground." BBC

Simon Property Group SPG +0.6% (SPG) CEO David Simon predicts that the shopping mall is poised for a comeback, some malls are betting on big, immersive entertainment experiences as a footfall-drawing part of the post-pandemic shopping mall equation. A struggling mall in Houston has replaced a Bed Bath & Beyond BBBY +2% with a 40,000 square foot interactive art museum called Seismique, according to the Houston Chronicle. Another mall in the region is using a location of the home décor chain Z Gallerie that closed in 2019 to house an augmented reality experience from a special effects company called Flight School. Mall property owners assert that experiential entertainment like this can fill space vacated by retailers that are moving toward smaller concepts, act as a draw to bring foot traffic to other mall stores and improve the profile of a mall. Forbes

Why Brands Are Leaning Into Heritage

Is it any coincidence that the youngest of the top-four handbag brands on resale site The RealReal — Louis Vuitton, Hermès, Chanel and Gucci — is 100 years old? Hardly.“We primarily see heritage drive demand in our core, high-value categories including luxury handbags, fine jewelry and watches,” said Sasha Shoka, head of women’s at The RealReal. “Resale value for these marquee handbags is up 30 percent year-over-year.” Spurred on partly by the pandemic, many European brands have been leaning into heritage in a variety of ways, with Balmain’s Olivier Rousteing resurrecting archival monograms and launching a podcast series about the house, founded in 1945, and Carine Roitfeld, style adviser at the Karl Lagerfeld brand, creating a Karl x Karl capsule for fall 2021 inspired directly by the late founder’s personal mode of dress. WWD 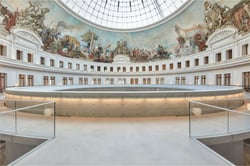 François Pinault’s Art Museum to Set to Open in May

Located between the Louvre and Centre Pompidou in Paris, The Bourse de Commerce Pinault Collection is established by the Kering owner. It was originally slated to open in June of 2020 but was delayed by the Covid-19 pandemic. Starting on May 22, the museum will be open Wednesday to Monday, 11 am to 7 pm, and an online reservation will be required to access the museum. The Bourse de Commerce will show Pinault’s personal collection, which he has long wanted to show in Paris. It contains thousands of pieces by artists like Piet Mondrian, Damien Hirst and Jeff Koons. According to the museum’s website, Pinault sees The Bourse de Commerce as a step towards “writing the next chapter of [his] cultural project.” BoF

We don’t have video games in the Olympics quite yet, but we’re getting closer. The International Olympic Committee announced Thursday that it was organizing a slate of five esports events to be staged ahead of the Summer Games this year in Tokyo. The Olympic Virtual Series will feature competitions in auto racing, baseball, cycling, rowing and sailing. Auto racing is not an Olympic sport, but then again, neither are any esports. However, a “road map” produced by an IOC panel in February of recommendations for the next several years included sections on growing digital engagement and on encouraging the development of virtual sports. It appears the IOC is intent on doing just that, but it will start with something of a toe-dip into the virtual waters. “The Olympic Virtual Series is a new, unique Olympic digital experience that aims to grow direct engagement with new audiences in the field of virtual sports,” IOC President Thomas Bach said in a statement. “It encourages sports participation and promotes the Olympic values, with a special focus on youth.” The Washington Post