After a blockbuster year that saw net revenue climb from $110.5 million in 2019 to $263.1 million in 2020 (even as it donated tens of thousands of scrubs to healthcare workers across the country), direct-to-consumer apparel startup Figs will make its market debut on the New York Stock Exchange this week. And for the first time, retail investors (industry parlance for nonprofessional buyers and sellers) are going to be allowed to try to get in on the ground floor by asking to purchase stock through Robinhood before the debut. The investment app just rolled out IPO Access, a tool that lets its users potentially access shares of companies at the IPO price, in a move meant to democratize an aspect of investing that traditionally was exclusive to wealthy investors and professional traders. The company is offering 22,500,000 shares of its Class A common stock at between $16 and $19 per share. That brings Figs a valuation in unicorn territory, at more than $3 billion. The share offering is split between Figs’s own 5,875,000 shares of Class A common stock and 16,625,000 from those of its largest shareholder, Tulco. Figs isn’t receiving any proceeds from the sale of Tulco’s shares. Additionally, Tulco is offering 3,375,000 shares of Class A common stock to underwriters who will have a 30-day option to purchase at the IPO price, “less underwriting discounts and commissions,” according to a company statement. Fast Company

Johann Rupert, Richemont’s chairman, insists he has no interest in selling the Switzerland-based luxury goods company, but admitted Kering proposed a partnership of sorts to him “more than a year ago,” according to the Financial Times. Online publication Miss Tweed originally reported in late March that Richemont had been approached by French luxury goods group Kering for a potential merger in January but had rejected the offer — a timeline, Financial Times points out, which differs from the one Rupert alluded to. Speculation over a potential team-up has been swirling for years, as industry experts note it would aid the two companies in competing with LVMH given Kering’s edge in soft luxury items such as leather goods and Richemont’s in hard luxury, like watches. Rupert’s confirmation of past Kering-Richemont talks comes as luxury rebounds rapidly from the pandemic-driven shut downs. Shares in the Cartier parent rose nearly 6 percent after the group proposed to double its dividend and flagged strong current trading with “accelerating trends across all business areas.” BoF

Jeff Bezos has a new pet lion. Amazon.com Inc. has reached a deal to acquire the storied MGM Studios for $8.45 billion, a move that will significantly bulk up its content library and entertainment IP in the escalating war between premium streaming services. In a joint announcement Wednesday, the companies said MGM’s arsenal of more than 4,000 titles—including franchises ranging from James Bond and The Pink Panther to the Rocky and Poltergeist movies—will complement the Seattle e-commerce giant’s existing Amazon Studios, which is largely focused on TV series. For Amazon, the acquisition is the largest since it scooped up Whole Foods Market for $13.7 billion in 2017. It comes as competing firms such as Disney and Netflix are spending more and more billions each year to keep their streaming services replenished with fresh movies, TV series, and familiar franchises. Fast Company

American Luxury Is Finally in Vogue
European luxury brands tend to be better investments than American ones, but this year may be an exception. Shares in Tapestry, the New York-listed holding company for labels including Coach and Kate Spade, are up 40% since the start of the year, while Michael Kors-owner Capri has gained 27%. That puts both stocks ahead of big European peers such as Hermès, LVMH Moët Hennessy Louis Vuitton and Gucci-owner Kering. One reason is that the U.S. brands reported better than expected sales in their latest quarterly numbers, thanks in part to strong demand for designer clothing and handbags in China. Their e-commerce businesses are growing quickly: Tapestry’s online sales have doubled in a year and now comprise almost 30% of turnover. The two companies have also managed their inventory levels better lately, allowing them to sell more products at full price and increase their gross margins. And their valuations had more ground to make up after investors fled to the safest luxury stocks such as Birkin handbag maker Hermès throughout 2020. Wall Street Journal 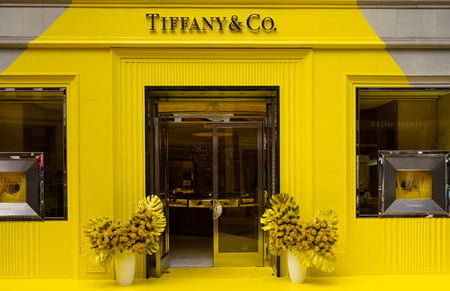 Tiffany & Co. Parlays Viral April Fool’s Joke Into Quirky Retail Experience
Tiffany & Co. is taking its April Fool’s theme pop-up on the road. This past weekend, the jeweler hosted a yellow diamond-themed installation at its Beverly Hills location — nodding to a recent social media joke in which Tiffany claimed its new brand color was yellow, usurping its famous Tiffany blue hue. The robin’s egg color returned to Tiffany’s brand channels the following day, but the success of the April Fool’s joke lingered — eliciting a viral response online. In ode, Tiffany temporarily remodeled its Rodeo Drive location over the weekend — with yellow furniture, fixtures and, for the first time, a yellow Tiffany & Co. box and shopping bag. There was also a “Yellow Diamond Café” on site — with sunny treats like ginger turmeric lattes, lemon soda and honeycomb ice cream. An exhibit of important loose yellow diamonds (including the 128.5-karat Tiffany diamond), photo booths and virtual try-on opportunities rounded out the pop-up’s quirky, experiential tone. WWD

We previously wrote about Propy using blockchain technology to smooth real-world real estate sales by introducing the concept of smart contracts. Propy was the first blockchain startup to make that work. Now the company is pushing the boundaries again, by auctioning a real apartment as an NFT. Although one might want to brush this aside as a stunt, the event is designed to make the point that it could well be done legally. And, by golly, they are going to try. The auction will be of the NFT attached to a modern, brand new, one-bedroom apartment in Kiev, Ukraine, that Propy previously made history with by making it the first-ever level blockchain-based real estate sale. The NFT created by Propy will, it says, transfers real ownership of the property. Just in case you haven;t been paying attention, NFTs, or Non-Fungible Tokens, are cryptographic ‘tokens’ that represent a unique asset — such as a piece of art, music, or other collectibles — and certify ownership digitally. NFTs have set the crypto-world alight with their potential to be applied to just about anything, including a work of art by Banksy which was then burnt. TechCrunch