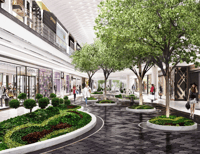 After 28 years of working at Neiman Marcus, Ken Downing wants to leave his imprint on shopping centers. Triple Five Group, the Canadian developer known for combining retail and entertainment at enormous centers such as West Edmonton Mall, the Mall of America in Bloomington, Minn., and the upcoming American Dream in East Rutherford, N.J., on Sunday revealed to WWD exclusively that Downing will become the company’s first chief creative officer. The luxury department store veteran will report to American Dream president Don Ghermezian and lead the design, advertising, marketing, public relations and events teams for existing, new and future projects. His purview will extend beyond luxury retail to include all brands at the center, as well as entertainment and culinary offerings. WWD

A Giant Disco Ball and Three DJ Sets: Inside Galeries Lafayette’s Epic Opening Party
If it wasn’t made clear enough from the 7-meter-wide disco ball that was hung on the Avenue des Champs-Elysées that evening: It was the party of the year. It seemed like the whole of the Paris fashion scene flocked to the opening of the Galeries Lafayette Champs-Elysées on Wednesday. The 70,000-square-foot flagship celebrated its arrival on the “most beautiful avenue in the world” by throwing a Champagne-flowing mega bash complete with a live orchestra, a voguing performance, a concert by rising afro-trap star Aya Nakamura and no fewer than three DJ sets. Guests flowed through the illuminated tunnel designed by architect Bjarke Ingels to congratulate Galeries Lafayette executives Nicolas and Guillaume Houzé on their big night, to the sound of violins playing a wide range of classics — from Bruno Mars’ “Uptown Funk” to a surprisingly convincing rendition of George Michael’s “Freedom.” WWD

Drew Barrymore has embarked on several business ventures over the years — production, wine and fashion to name a few — and along the way she’s learned some lessons. Perhaps the most important lesson she’s learned is to keep things streamlined. “If you stay in one lane and associate with one word — a tentpole, a nucleus, a root — you can grow in [several] categories. Just do it under the same umbrella,” said Barrymore. She’s applying this ethos to her latest venture, Flower Home, an affordable luxury home decor and furniture line she’s partnered on with Walmart. The eclectic assortment of nearly 220 items, inspired by Barrymore’s travels as well as her own homes she’s decorated over the years, is set to roll out today across Walmart’s portfolio of sites, including walmart.com, Jet.com and Hayneedle.com. WWD

Hims and Hers expand further into non-prescription hair care

Direct-to-consumer lifestyle brand Hims and its sister-brand Hers are extending further into over-the-counter products. Starting March 27, Hims now offers over-the-counter hair-care options including a reformulated shampoo and a brand-new conditioner product, both of which are meant to prevent hair loss. They will be available for purchase individually and in a new hair kit on ForHims.com. Starting April 17, Hers will also offer more over-the-counter hair-care options combating hair loss, including a new conditioner and a minoxidil topical product. They will be available for purchase on ForHers.com. The goal for Hims and Hers is to reach customers outside of those interested in prescription medical treatments via their telemedicine businesses. Glossy

Bobbi Brown and Walmart Want to Bring Wellness to the Masses

Wellness has a bit of a class divide — there are companies like Goop that cater to women who will pay $90 for “Madame Ovary” dietary supplements, and then a mass of cheap, undifferentiated products, from hair growth gummies to dubious laxative-infused teas hawked on Instagram and Amazon. Enter Bobbi Brown. Since leaving her beauty brand in 2016 after nearly three decades, she has repositioned herself as a wellness guru for the 99 percent. Brown’s line of supplements, Evolution_18, launched on QVC, and she curated a wellness-themed section for mid-market department store chain Lord & Taylor's since-closed Manhattan flagship that was stocked with everything from powders to sneakers. BoF

Amazon to Launch Mobile Ads, in a Threat to Google and Facebook

Amazon has hit on a new way to grab a chunk of the $129 billion digital advertising market now dominated by Google and Facebook Inc.: sell video spots on the e-commerce giant’s smartphone shopping app. Amazon has been beta testing the ads on Apple Inc.’s iOS platform for several months, according to people familiar with the plan. A similar product for Google’s Android platform is planned for later this year, said the people, who asked not to be identified because they’re not authorized to share the information publicly. Bloomberg

After Anya Hindmarch, Mayhoola Said to Be Rethinking Fashion Strategy

With one of its earliest investments, Anya Hindmarch, sold to the Marandi family, Mayhoola for Investments’ passion for fashion may be cooling. Multiple industry sources have indicated the secretive Qatari investment group that owns Valentino, Balmain and Pal Zileri could be looking to distance itself from the luxury arena despite its runaway success with Valentino and its ambitions to build Balmain. Having worked with Anya Hindmarch Ltd., Mayhoola principals would have learned the industry can be brutal for small, high-end independent brands. Competition is fierce, market share is always under threat and these businesses need a pipeline of money to grow. Fashion is one long, and very expensive, play. WWD

Chanel’s first flagship in South Korea was a bustling beehive on Thursday, as the new space in Apgujeong officially opened its doors for the first time to welcome Pharrell Williams and the debut of his much-awaited capsule with the luxury house. The musician, known for pushing the borders of fashion’s gender norms, joined Jennie Kim from Blackpink and rapper Jay Park, in reveling to see the collection on the shop floor for the first time, which South Korea gets access to a full week before the rest of the globe. “They’ve given me so much,” Pharrell told WWD. “They [Chanel] continue to put their arms around me and open their doors. I know that this opportunity has never been afforded to anyone else, and I just want to say how grateful I am.” WWD

Marijuana company Beboe is making its first foray into the category with a sub-brand dubbed Beboe Therapies launching March 27. To start, Beboe Therapies will debut a face serum with 300 milligrams of full-spectrum CBD and sheet masks containing 50 milligrams of CBD. They retail for a luxury price point — $148 and $78, respectively — and will be sold on BeboeTherapies.com beginning April 1. Barneys New York has signed on as a wholesale partner for a later April release in its stores and on its website, and more luxury retail partners are in the works, said Scott Campbell, Beboe co-founder. Glossy