Companies eager to pitch in with production of PPE goods now have an online resource to help put their plans in motion. Fashion for the Front Lines, a new task force that is focused on sourcing personal protective equipment for health-care workers, has launched a site to help companies navigate production and find resources. As the group’s site indicates, the mission is “to create simplicity, centralization and standardization to support the U.S. response to the severe lack of PPE goods during the COVID-19 crisis.” However, none of the 20 members of the task force wanted to be identified in order to keep the focus on the group’s mission, according to two FFF leaders. “We’re really focused on how do we get gowns to people quickly. Period,” said one of them during a joint interview Wednesday. WWD 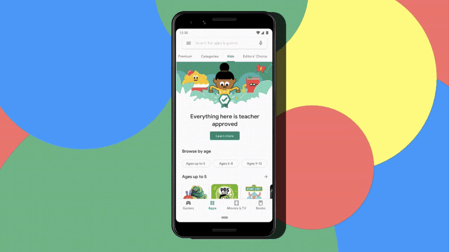 Screens may not be the best way for kids, especially young children, to learn. But with 1.5 billion students home from school around the world, e-learning has taken over. Attendance is now taken digitally, and apps and websites have replaced face-to-face teaching as the tool of the era. In turn, Google is launching a new certification for apps in its Google Play Store called “Teacher Approved.” Over the past few years, the company has contracted over 250 teachers to develop a rubric and rating methodology for apps that are suitable for children under 13 to download and use. Google had planned to launch teacher approved apps later this year, but with the COVID-19 crisis, it expedited the release. Fast Company

BMW is making a monumental shift in its global marketing budget with a move into esports that it hopes will lead to mind share among the next generation of consumers. The luxury German carmaker unveiled a partnership it formed with five gaming organizations—Cloud9 in the United States, Fnatic in the United Kingdom, FunPlus Phoenix in China, G2 Esports in Germany and T1 in South Korea—with the goal of capturing eyeballs glued to video game competitions in titles like League of Legends, DOTA 2, Fortnite and FIFA. “In the long-term esports will be our biggest footprint,” says Stefan Ponikva, head of BMW Brand Experience Shows & Events, adding that esports will eventually eclipse spending on sports such as motorsports and golf. “The younger generation, being born digital first, doesn’t really care about TV or traditional advertising. Esports is our tool to reach them.” Forbes

Global alarm and frightening stories of healthcare workers on the front lines of the COVID-19 battle have millions on the sidelines wanting to help but not sure where to look or apply their skill sets. To allay that confusion, XPrize spinoff HeroX—which allows anyone to create a challenge to a problem that might lead to breakthrough innovations—is pooling all COVID-related challenges from its own and other crowdsourcing platforms into one place. The resource hub, COVID-19 Central, launched April 7 to connect innovators with opportunities to develop life-saving technologies during this global crisis. Fast Company

The California Department of Motor Vehicles (DMV) issued Nuro a permit to operate two self-driving delivery vehicles on select streets in the Bay Area without a safety driver present. Nuro becomes the second company to get such a permit after Waymo received its permit in November 2018. The company’s R2 fleet will start service with free deliveries to some customers in Mountain View, CA, Nuro’s Chief Legal and Policy Officer David Estrada wrote in a Medium post. And due to the coronavirus, he said the approval also comes at a time when the public needs "contactless delivery services." The two fully driverless cars will have a maximum speed of 25 miles per hour and will only be allowed to operate in fair weather conditions on streets with speed limits of 35 miles per hour. Retail Dive

The current global health crisis isn’t producing many winners. Even so, some retailers are better positioned to weather the storm — and perhaps even come out stronger. One of them is Lululemon Athletica. “What’s important to note about Lululemon — beyond what they’ve done from a business model perspective, in terms of their men’s business ramping up and then all the things they’ve done with innovation on the women’s side — is that their model’s perfect, on a relative basis for what we’re going through today,” Ike Boruchow, managing director and senior retail analyst at Wells Fargo, told WWD. That model includes a cash-positive balance sheet, high margins, low return rates, a lucrative e-commerce business and a loyal fan base. WWD

Can Direct-to-Consumer Brands Survive the COVID-19 Apocalypse?
Like many Americans under lockdown, I’ve been spending a lot more time on the internet. As usual, my screens have been filled with ads for flashy direct-to-consumer brands, targeted precisely to my tastes: an Everlane cashmere sweater, the latest Rothy’s flats, a new Cuyana bag. But not once have I been tempted to click. For one thing, I have nowhere to go in a new outfit. And as I watch the economy crumble and unemployment figures skyrocket, it seems wise to save money. Fast Company