Here's our roundup of this week's top retail news. Soylent debuts its first food product, Neiman Marcus takes a stake in a resale site, Pinterest's IPO raises $1.4B and more! 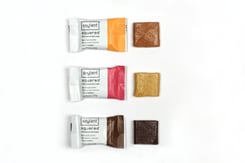 So Soylent — the contrarian food replacement company that made its name hawking beige, drinkable meals to time-crunched Silicon Valley workers — on Thursday unleashed the next-best-thing: Soylent Squared, a 100-calorie, very much chewable “mini-meal,” which is not a cube, but instead a perfect (perfect!) square. For fans, Squared represents an obvious, if modest, next step, from liquid to solid. To the rest of the world, Soylent Squared is a snack-size protein bar. NY Times

Walmart partners with Kidbox for subscription service
Walmart announced a partnership with children apparel curation retailer Kidbox featuring apparel from 120 kids' brands, including BCBG, Butter Super Soft, C&C California and Puma. The Walmart Kidbox stylebox includes four to five garments, including sweaters, denim, dresses and T-shirts, in sizes 0 to 14 for girls and 0 to 16 for boys, for $48, about 50% off the suggested retail price. Customers can order a box and schedule delivery on demand or sign-up for automatic shipments of up to six boxes a year. Retail Dive

In the aftermath of the fire at Notre-Dame, one of the great symbols of France, the luxury industry — another symbol of the country, thanks to names such as Dior, Louis Vuitton and Saint Laurent — has pledged hundreds of millions of euros to the cathedral’s restoration. The donations were followed on Tuesday by other pledges that soon surpassed 850 million euros, or about $960 million, and included beauty, energy, technology and finance companies as well as private individuals. NY Times

Pinterest operates in a crowded digital marketing space, where Google and Facebook get the lion’s share of ad dollars, and a smattering of smaller platforms like Twitter and Snap get the rest. The San Francisco-based company, which serves as a sort of digital bulletin board for pictures and ideas for furniture, fashion, weddings, recipes and more, has a direct line to millions of people who are looking for specific things to buy. That may give it an edge in making money from its user base compared with some of its peers. BoF 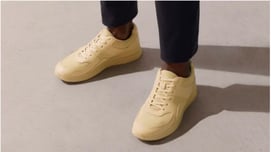 Sneakers are the shoe of our time, as comfortable as they are stylish, with countless variations possible. “Sneakers have become part of the American uniform,” says Allison Melville, Everlane’s general manager of footwear and accessories. “We think of them as a closet staple, along with jeans and T-shirts.” But sneakers also have a very large environmental footprint. Today, Everlane is unveiling an eco-friendly sneaker, dubbed the Trainer, that has been designed with as little virgin plastic as possible, and is also carbon neutral. In keeping with Everlane’s normcore aesthetic, the shoe is basic and monochromatic, with a classic running shoe silhouette. It costs $98, and comes in a range of colors from navy to pink to yellow.  Fast Company