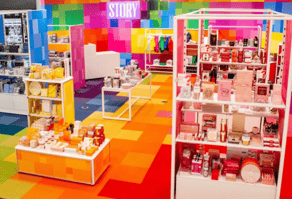 Macy’s Inc., in one of its most innovative maneuvers to date, has launched “Story at Macy’s” concept shops at 36 of its U.S. locations. The shops will average 1,500 square feet in size; have customized, flexible fixturing, and, similar to the original Story store at 144 10th Avenue in the Chelsea section of Manhattan, will change their merchandise theme, products and decor every two months. For the inaugural Story at Macy’s, the theme is color and the shops will sell at least 70 vendors, primarily small ones, and display an eclectic range of more than 400 items for men, women and kids. WWD

Manolo Blahnik Splits With Longtime U.S. Partners
George Malkemus, president of Manolo Blahnik USA, and Anthony Yurgaitis, the company’s vice president, have not renewed their long-running license with the British luxury shoe company. A statement sent by the Manolo Blahnik U.S. business to WWD said: “After meeting with Kristina Hulsebus, Mr. Blahnik’s niece, who, along with her in-house counsel and financial adviser, offered unacceptable terms, George Malkemus and Anthony Yurgaitis, on behalf of MBUSA, have chosen not to renew their license agreement of 37 years.” WWD

LVMH Moët Hennessy Louis Vuitton got off to a flying start in 2019, boosted by the “remarkable” performance of its star brand Louis Vuitton, signaling that the luxury sector is maintaining its momentum despite concerns over a slowdown in China, which accounts for one-third of sales of high-end goods worldwide. The group’s overall revenues were up 16 percent in the three months ended March 31 to 12.54 billion euros, helped by a stronger-than-expected performance in its key fashion and leather goods division. Sales were up 11 percent on an organic basis. WWD

J. Crew delivered a flurry of announcements on Thursday in its ongoing attempts to steady the corporation, including floating the possibility of an IPO for its profitable Madewell brand. The company is reportedly once again in restructuring talks as it deals with $1.7 billion in debt and the reality of having approximately $25 million of cash on hand, factors that have also landed it on bankruptcy watch lists for some time. "If executed, a Madewell IPO could improve the capital structure and better position the company to address its debt," said Moody's Corporation Vice President Raya Sokolyanska. Retail Dive

Elizabeth and James Leaves Contemporary Market Behind for Kohl's

Elizabeth and James, the contemporary brand launched by Ashley and Mary-Kate Olsen, has entered into a licensing agreement with Kohl’s after shutting down its store and most in-house operations. In September, the company – which was known for its mid-priced casual wear and accessories – laid off its design team, attributing the decision to poor sales, according to people close to the company. The production team stayed on until the end of the year to help fulfill orders that were already in place and has since been let go as well. BoF

The ailing Italian luxury house Roberto Cavalli has shuttered its North American operations, hours after the brand said it was seeking a deal with creditors to stave off a bankruptcy filing and less than a week after the departure of its creative director, Paul Surridge. On Friday, the brand confirmed in an emailed statement that it intended to file a plan with Italian courts that would allow the business to keep running while it secured new investors or ownership. The fashion house, headquartered in Florence and famous for its flesh-baring, flamboyant designs (often in animal prints), has fallen from favor with its fan base in recent years, struggling to turn around falling sales and to maintain its profile in an increasingly competitive global luxury market dominated by the major conglomerates. NY Times

Wayfair announced that Way Day, a sales holiday the company debuted last year, will begin on April 10 at 12 p.m. ET. The event will last 36 hours, extended from last year's 24-hour sale. The company said more than 100,000 products will be included in the sale, and thousands of "Flash Deals" will occur throughout the event. Customers who use a Wayfair credit card will receive triple rewards on purchases, which can be used for future purchases on the site. Retail Dive

Movie Stars Want to Cash In on Their Influence Too

Michelle Pfeiffer joined Instagram less than three months ago, but she’s already accrued the sort of large, highly engaged following that would make her the envy of even a seasoned influencer. Her first post, a scene from her turn as Catwoman in Batman Returns, scored over 500,000 views, and as of Sunday, the Scarface and Dangerous Minds actress had 215,000 followers. She’s made no secret of why she suddenly decided to join the Instagram crowd: on Monday Pfeiffer launches Henry Rose, a line of five fragrance made with “clean” ingredients. BoF

Fred's is closing nearly 30% of its stores

Discount chain Fred's is looking for a new strategy. It's first step is closing a lot of stores. The Memphis-based retailer will close 159 of its 557 stores, it said in a statement Thursday. The stores, which are spread across states including Texas, Arkansas, Alabama, Georgia, Louisiana, Mississippi, Kentucky, and Tennessee, were chosen because they were underperforming or unprofitable, Fred's (FRED) Chief Executive Officer Joseph Anto said. Many of them had leases that were expiring soon. Fred's began liquidation sales at the closing stores on Thursday. They will be closed by the end of May. CNN