Here's our roundup of this week's top retail news. Whoopi Goldberg launches her own fashion line, Away joins the unicorn club and more! 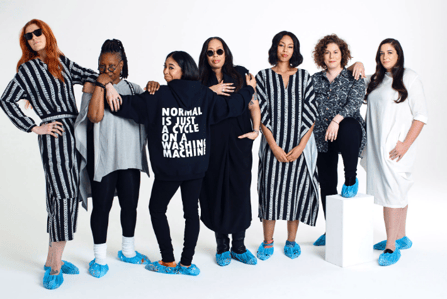 Whoopi Goldberg’s Next Act: Fashion Entrepreneur
Whoopi Goldberg’s life has had many chapters: Broadway star, blockbuster movie headliner, producer, author, talk show host, philanthropist, activist, political commentator. But now the EGOT winner (that’s Emmy, Grammy, Oscar and Tony) has found a new role: fashion icon and entrepreneur. In recent years, Goldberg’s irreverent, laidback love of quirky sweatshirts, bright colour and mismatched sneakers has earned her the praise of fashion magazines and blogs as mainstream trends have turned towards comfort and meme-friendly nonconformity...Now Goldberg is capitalising on the fashion moment by turning her unique sensibility into a size-inclusive contemporary line of comfortable, graphic separates, tunics and dresses. Dubgee launches May 15 on Amazon, Ashley Stewart, Le Tote and Neiman Marcus, with prices ranging from about $90 to $400. BoF

Bandier Plants Flag on West Coast
It only took 10 trips to Los Angeles but Bandier founder Jennifer Bandier finally found the right location for the company’s West Coast flagship on Melrose Avenue. The multiuse space opens to the public Friday, giving the company a physical presence outside of New York and Dallas. Los Angeles is now the company’s largest store. The 8,800-square-foot space includes a Coffee Dose café — complete with CBD-spiked lattes — and retail on the first floor; footwear, accessories and the fitness studio Studio B on the next level, and a third floor dedicated to events. The assortment will have its roster of exclusives, including a Calé capsule and Hand & Rose, along with Golden Goose styles unique to the L.A. store. WWD

Walmart on Thursday reported its best Q1 U.S. comparable sales figures in nine years, with comps jumping to 3.4% in the first quarter. Total revenue in the quarter rose 1% year over year to $123.9 billion. Walmart U.S. e-commerce sales rose 37%, helped along by "strong growth" in online grocery sales and Walmart.com sales of home and fashion goods, the company said. Sam's Club e-commerce sales were up 28%. Brick and mortar didn't fare as well, comp sales rose at a sluggish 0.3%, hurt by a decline in tobacco sales, the company said. Retail Dive

Coty Architects Bernd Beetz, Stephen Mormoris Start New Fragrance Business
The men who built the mass fragrance category have recently taken on more niche interests. Bernd Beetz, who built and led Coty as chief executive officer through the celebrity fragrance boom, and Stephen Mormoris, the former chief marketing officer for Coty, have a new global beauty business. It’s called Edge Beauty, and through subsidiary Scent Beauty, the duo have a plan to build a next-generation, direct-to-consumer fragrance business. Scent Beauty plans to partner with brands and personalities that have a point of view and create scents that speak to niche audiences. They’ve partnered with fragrance house Firmenich for the project, and will handle packaging design, manufacturing, warehousing and distribution on behalf of brand partners. WWD

Cult-favorite skin-care brand Dr. Barbara Sturm opens first physical store
Dr. Barbara Sturm, the aesthetic doctor-founded, skin-care brand, is opening its first brick-and-mortar store in New York City on May 16. The brand hopes its new physical outpost, which is its first outside of its clinic in Dusseldorf, Germany, will give it exposure to a much larger audience. Dr. Barbara Sturm is currently sold online through its e-commerce site, Molecular-Cosmetics.com, as well as via Net-a-Porter, Goop and Revolve. It is also stocked at 30 retailers, including Bluemercury, Violet Grey and Neiman Marcus. The new standalone store follows the brand’s six-month NYC pop-up spa that ran from November 2018 to April. Glossy

The Old Tailor Shop Goes Digital, With a Store Personalized Just for You
At a traditional tailor shop, the kind that’s been around for centuries as an atelier for bespoke suiting, the personal touch has always been vital. Shoppers have relationships with their tailors, who know their style and exactly what they’d want to wear. Now that relationship is getting a technological makeover. Knot Standard, a custom-suit startup backed by more than $25 million in venture capital funding, has spent the past few years trying to figure out what suit its menswear shoppers want when they visit a showroom in person. After numerous attempts, it has settled on something management calls a “Style Wall,” a way to effectively personalize an entire store for individual customers when they step through the front door. Bloomberg

Fred's to close another 104 stores
Fred's Inc. plans to close an additional 104 stores by the end of June. The decision was made amid ongoing review of the drug store retailer's store portfolio and on top of the nearly 160 closures it announced in April, according to a Thursday securities filing. The new closures were announced in tandem with a forbearance agreement Fred's entered into with a group of lenders. Fred's CEO Joseph Anto described the additional closures in a press release as a "necessary step in the continued restructuring of Fred's." The retailer has hired Malfitano Advisors and SB360 Capital Partners to help liquidate the stores. Retail Dive

YouTube Ups Its Fashion Ante
YouTube used to be a platform used solely for watching music videos — or funny animal clips — but it’s now polishing up and preparing to become a more dynamic space, filled with sophisticated fashion and beauty content by a host of creators, including influencers. High-profile designers and models have been getting in on the YouTube act, too. This isn’t an overnight shift: The platform has been evolving over the last few years, with vloggers coming onto the scene and using YouTube to share candid content and build sizable audiences: Makeup tutorials, fashion hauls and daily feeds with vloggers sharing footage of their day, including mundane tasks like making breakfast or running errands, have all become commonplace in the YouTube world. WWD