Here's TRAUB's roundup of recent retail news. The new Toys R Us plans to open stores this year, Bic launched a new razor brand exclusively on Amazon, Rent the Runway and Nordstrom are teaming up and more!

Defunct children’s retail chain Toys R Us will open new stores later this. The company liquidated its assets last year after entering bankruptcy in September 2017. The company had about 800 locations when it was liquidated. According the Bloomberg, the retailer will come back with roughly six smaller stores and an e-commerce site this year. The new stores will be about one-third the size of the chain’s previous storefronts and offer more experiential shopping. CNBC

Amazon.com Inc unveiled its online professional beauty store to sell supplies to licensed professional stylists, barbers and aestheticians, weighing on shares of other beauty retailers. It would sell a wide range of brands from Wella Colour Charm and Rusk to OPI Professional, and other supplies typically found in salons and spas, Amazon said in a blog post. Following Amazon's announcement, shares of beauty retailers Ulta Beauty Inc fell about 3 percent and those of Sally Beauty Holdings plummeted 9 percent. Stylists can now find almost everything they need to run their business in a single store at low prices, with fast, free shipping in one to two days on eligible orders with Business Prime. BOF

Rent the Runway and Nordstrom Are Teaming Up

Nordstrom Inc and Rent the Runway announced a partnership on Thursday that aims to draw more foot traffic into the department store while making the clothing rental service more convenient so it can improve service to existing customers and attract new ones. Rent the Runway "drop-off boxes," where subscribers can quickly scan and return rented items, will be placed inside four Los Angeles-based Nordstrom stores, three of which are smaller "Nordstrom Local" stores billed by the chain as "a convenient drop-in hub" closer to residential areas. BOF

Iris Nova, the Coca-Cola-backed startup that creates Dirty Lemon beverages, is announcing plans to spend $100 million over the next three to five years to expand its offerings. Founder and CEO Zak Normandin said the money will go towards launching new beverage brands developed internally at Iris Nova, as well as investing in beverages created by other companies, which will then distributed via the Iris Nova platform. “This is the way for us to compete with the bigger beverage companies,” Normandin said. He added that he’s open to working with both established companies and startups taking advantage of the shift away from “high calorie, high sugar beverages.” Either way, they’ll get access to the Iris Nova platform, which allows them to accept orders via text message, and to distribute their beverages next-day or same-day to every major U.S. market. Tech Crunch

Reebok earlier this month launched a maternity collection, designed for new and expecting mothers. The collection is meant to offer "options for an active lifestyle," including hitting the gym or running errands. To start with, the collection will include leggings and tank tops in sizes XS to XL, with high-stretch fabric. The core products, the Lux Maternity Tight and the Seamless Maternity Tank, are both built with softness, comfort and support in mind, according to the release. Priced at $65 and $40 respectively, the products are available in the U.S. currently, with plans to roll out globally starting in the fall of 2019. Retail Dive

It’s not just women who should have the option to rent, return and refresh their wardrobes. At least according to Scotch & Soda, which is doing its part to give men the same opportunity. The Amsterdam-based apparel brand in September will introduce Scotch Select, which it believes to be the first men’s subscription rental program. Women’s companies, including Ann Taylor, Express, Vince and New York & Co., all offer a similar program for female customers. All of these brands as well as Scotch & Soda are using the CaaStle technology platform to power their initiatives. WWD 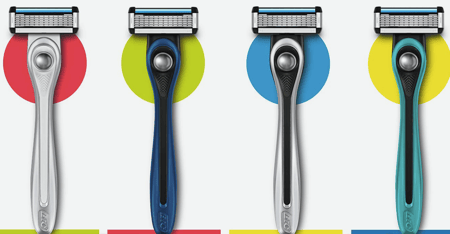 Bic is the latest brand to team up with Amazon for an exclusive product launch. Made For You is a razor brand for men and women made by Bic and selling exclusively on Amazon. The line launched with one razor, an $8.99 gender-neutral version in four colors, with three options for refillable razors in four, eight and twelve packs. The pricing is in line with direct-to-consumer brands like Harry’s and Billie, which sell razor starter packs for $9 and refills for between $9 and $10 for a four-pack. Made For You razor four-packs sell for $9.99. Bic’s other razors, which are separated into men’s and women’s versions, are cheaper on Amazon, where they sell for $5.49 for a new razor handle and four cartridge replacements, while packs of disposable razors sell for between $6 and $9. DigiDay

Neighborhood Goods, which calls itself a progressive department store, will open its second location at Chelsea Market in a 4,500-square-foot, high-profile space in the fall. Another 3,000 square feet on the lower level will be activated as selling and event space, but not immediately. As a discovery and delivery mechanism for customers and brands, Neighborhood Goods — whose inaugural 14,000-square-foot space at Legacy West in Plano, Tex., bowed in November 2018 — exposes the former to labels they might not see at traditional retailers, and offers the latter a cost-effective way to capture the attention of consumers. WWD

Verishop’s plan to be the Amazon of “affordable luxury”

Verishop, a new e-commerce platform launched by a former top Snap Inc. executive on Tuesday, has set itself a big task: attracting younger shoppers who have graduated from Amazon prices. After raising about $17 million from investors like Lightspeed Venture Partners, which also backed Goop and Stitch Fix, the millennial-centric lifestyle platform is entering a crowded, but quickly growing space. While Verishop has been called a luxury version of Amazon, it is positioning itself price-wise somewhere between the US retail giant and accessible luxury brands catering to shoppers in their 20s and 30s. Verishop launched with 160 brands, most of which are in the contemporary price point and include Diane von Furstenberg, IRO and Milly. Vogue Business

Outdoor clothing and sporting goods company Arc’teryx is just the latest in a string of brands to launch a program designed to repurpose and reuse (gently) used gear. The brand launched its Rock Solid Used Gear program, a “re-commerce” program that asks customers to send in or drop off their used Arc’teryx gear to one of the brand’s retail stores across the U.S. If the product is in good condition, the brand will give customer a gift card totaling 20% of the original retail price for the item. Arc’teryx then takes items sent in from customers and resells them at a discounted price. If it’s not in good enough condition to resell, but it’s still usable, the company said it will still take the item and donate it to someone in need. Glossy

Mr. Larkin launches first DTC line to drive down costs for the brand and customers

Mr. Larkin is the latest among many brands and retailers now rethinking their wholesale strategies, and pivoting to a direct-to-consumer model. Earlier this week, Mr. Larkin, a web store launched in 2013 by designer Casey Larkin Blond that sells indie fashion brands (with prices averaging $200 to $300 per item), rolled out its first direct-to-consumer collection, for the pre-fall season. It will be sold exclusively on the Mr. Larkin website and in the brand’s store and studio located in Copenhagen. Glossy