Zara owner Inditex to close as many as 1,200 stores

Zara owner Inditex on Thursday said it will close 1,000 to 1,200 stores over the next two years, at a pace of 500 to 600 each year. "The optimisation plan focuses on stores at the end of their useful life, especially young concepts whose sales can be recovered in nearby stores and online," the company said. The fast-fashion giant said it expects online sales to reach more than 25% of total sales by 2022, with a "higher quality network of better located stores in conjunction with online" generating long-term annual like-for-like sales growth of 4% to 6%. Retail Dive

Sephora Will Dedicate 15% of Shelf Space for Black-Owned Brands

Sephora said it will dedicate 15% of its stores' shelf space to the products of black-owned companies, becoming the first major retailer in the United States to take the "15% pledge."The pledge stems from a movement that began earlier this month amid demonstrations over the death of George Floyd and a national conversation about race inequality in America, including challenges that black business owners face in securing representation within big retailers. The 15% Pledge website specifically calls on Sephora, Target, Whole Foods and Shopbop to make the commitment. "We are inspired to make the 15% Pledge because we believe it is the right thing to do," said Artemis Patrick, Sephora's executive vice president and chief merchandising officer. CNN

Why Chanel Doesn’t Want to Change the Fashion System

Chanel has little interest in changing the fashion system. In recent weeks, a growing cadre of designers and retailers have called for rethinking the calendar that governs the development, delivery, presentation and discounting of collections. But when Bruno Pavlovsky, Chanel’s president of fashion activities, laid out his plans for the future of the multi-billion-dollar bastion of French heritage ahead of its latest Cruise launch, he made clear he still believes in the old way of doing things. Many of the labels calling for change are small-and medium-sized players, but even luxury megabrands such as Gucci and Saint Laurent are exploring initiatives to downscale the excesses of a crammed calendar of fashion shows and the colossal carbon footprint that accompanies it. Chanel, on the other hand, intends to hold fast to its six-shows-a-year schedule: two prêt-à-porter, two haute couture, Croisière (Cruise) and Métiers D’Art, the December presentation highlights the work of the brand’s artisanal ateliers. BoF 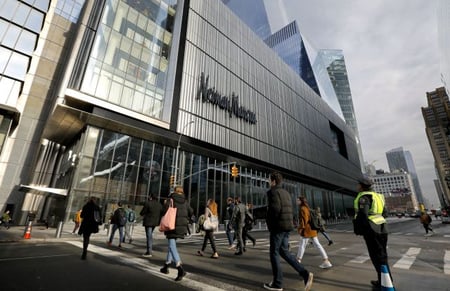 Neiman Marcus is considering pulling out of Hudson Yards or downsizing the site, among other potential closings by the luxury retailer around the country. The Dallas-based Neiman Marcus Group filed for bankruptcy reorganization on May 7 and is formulating a plan of restructuring involving streamlining the business. Sources said the list of locations being eyed for possible closures includes downtown Dallas; St. Louis; Ft. Lauderdale, Fla.; Natick, Mass., and Westchester, N.Y. Bankruptcy law enables retailers to get out of leases without penalty. No decisions on Neiman Marcus store closings or downsizings have been revealed and would depend on Neiman’s outlook on the stores, bankruptcy proceedings and negotiations with landlords. WWD

Simon Property Group Inc. is terminating its $3.6 billion deal to acquireTaubman Centers Inc., the latest sign of the severe pressure the retail sector and mall industry are contending with during the coronavirus pandemic. The deal, announced in February, would have combined two landlords as the industry struggles with an oversupply of malls and the decline of traditional retail stores against the rising tide of e-commerce. WSJ

Safety concerns have forced developers to rethink mixed-use projects combining retail, residences and offices, which have helped define the live-work-play ethos that many younger professionals seek. Mixed-use projects have been a hallmark of the country’s urban renaissance over the past couple of decades. They are often thriving complexes built with an ecosystem of residences, offices, plazas, hotels, shops and restaurants. Developers like them for the scope, and business owners like them for the round-the-clock density of people. In some cases, these projects have transformed whole areas: The 28-acre Hudson Yards over an old train yard brought new life to an underused corner of Manhattan, and the 53-acre Water Street Tampa in Florida will connect the city’s downtown with its waterfront. In general, they have helped define the live-work-play ethos that many younger professionals seek in cities.But the coronavirus threatens to upend the allure of retail and restaurants in these developments. Safety concerns and a changing patchwork of state and local virus-related regulations have led developers to rethink the layouts and designs of such areas. Ideas coming to the fore could be around for years, or they could start to fade away at the first sign of a coronavirus vaccine. NYT

Italy's Moncler said on Thursday it had signed an agreement with France's Interparfums to start selling perfumes, as it seeks to diversify its brand and lessen the deep impact of the coronavirus crisis on the luxury goods sector. The first products to be produced under the deal are expected to be launched in the first months of 2022. The license agreement will last until 2026, but can be extended for a further five years, the companies said in a joint statement. Moncler Chairman and Chief Executive Remo Ruffini said the launch of Moncler's first fragrances was "consistent with our selective brand extension strategy". In a separate statement, the group said the situation for luxury goods was "highly uncertain and also difficult in many markets, in particular in Europe and in Americas". Due to lockdown measures, 36 stores globally, out of 212, were still closed, it said, adding the novel coronavirus would have "important impacts on the performance of the group's first half results," with the second quarter harder hit than the first.BoF