Walmart wants to become a new "fashion destination" as Americans ease into the autumn season. The big box store announced Monday that it's launching Free Assembly, a clothing brand that is targeted toward people on the market for wardrobe staples at the affordable prices. The clothes are designed by the company's in-house design team, and the brand is launching online and in 250 stores. "At its core, this new brand is born from thoughtful, simple design, quality fabrics, modern silhouettes and styles updated for today," said Denise Incandela, Walmart's senior vice president of women’s group, elevated and online brands, in a statement. Starting September 21, the fall collection will kick off with more than 30 items for women, and 25 for men, all priced between $9 and $45. USA Today 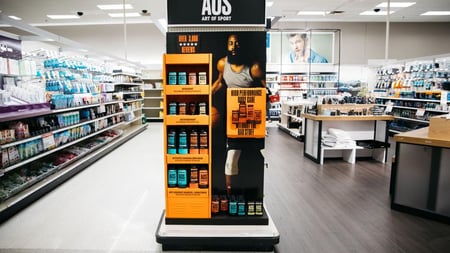 Kobe Bryant-Backed Startup Wants To Be The Nike Of Skincare. It Just Raised $6 Million To Advance Its Game Plan.

Art of Sport, the skincare and grooming brand launched two years ago with the backing of basketball legend Kobe Bryant and other athlete investors, is preparing to grow its retail presence six-fold next year.The company today announced it has closed a $6 million funding round designed to fuel its retail expansion. The round, the first external funding announced by the Los Angeles-based company, was led by CircleUp Growth Partners and includes Mark Cuban, Lightspeed Venture Partners, Bam Ventures, Darco Capital, and NBA veteran Wilson Chandler. The brand, currently sold in Target TGT +1.3% stores and on Amazon AMZN +1.7%.com and its own website, is planning to use the capital in part to ramp up production in preparation for a rollout to new retail partners early next year. Forbes

More Spotify podcasts could soon become TV shows or movies thanks to a new, multiyear partnership announced today between the streaming music provider and film and television production company, Chernin Entertainment. The agreement will allow Chernin to identify and adapt film and TV shows from Spotify’s library of over 250 original podcast series, totaling thousands of hours of content.The two companies, by way of Spotify-owned Gimlet Media, were already working together in collaboration with Pineapple Street Media on the forthcoming adaptation of the podcast series, The Clearing, about serial killer Edward Wayne Edwards. Those efforts will continue, while the deal opens up Spotify’s larger podcast library of shows from around the world to Chernin. TechCrunch

Farfetch wants to dominate the luxury e-commerce market. Thus far, it’s struggled to build a brand identity to match its ambitions.It’s hoping to change that this month, with the unveiling of a new logo, accompanied by a global campaign that aims to make the online platform for luxury brands a key shopping destination in the minds of consumers.“Brand is absolutely a strategic pillar for us,” said Founder and Chief Executive José Neves. “We think developing the Farfetch brand is one of the biggest opportunities for us as a business.” BoF

A Gucci collaboration with The North Face is in the works. The Italian luxury company on Wednesday evening teased the news with a short video posted on Instagram and TikTok showing stunning mountain views and panning to the image of a hand holding a flag in the wind with both the Gucci and The North Face logos. All to the sound of a foghorn. Asked to comment on the post, WWD received the following statement: “Gucci and The North Face confirm that they will be bringing a collaboration to life in the coming months that celebrates the rich heritage of both brands.” This would be the first time Gucci has worked on what could be a full-fledged collection with another brand since Alessandro Michele’s arrival as creative director five years ago, although Gucci has teamed for collaborations with the likes of Liberty and Ken Scott, for example. WWD

A number of prominent tech giants have banded together to fight . . . even more prominent tech giants. As The New York Times reports, tech firms including Spotify, Match Group, and Epic Games, have banded together to form the Coalition for App Fairness.The coalition is a collection of companies that are pressing for regulatory and legal action against app store owners–namely Apple and Google. The group cites three main issues they have with the current app store ecosystems.The formation of the group comes after Epic Games launched a public battle with Apple over the fees Apple took from Fortnite in-app purchases. Epic launched its own payment platform in an iOS version of the Fortnite app, leading Apple to boot it from the App Store. The two have been locked in a legal battle ever since. And since then, other app makers have also expressed unhappiness with the rules Google and Apple impose on their developers if they want to distribute through their app stores. Fast Company

Inditex SA’s quick-reaction strategy allowed the operator of Zara stores to reduce inventory in the middle of Covid-19 lockdowns, buoying first-half earnings.The Spanish clothing retailer managed to reduce stock-in-trade by 19 percent at the end of July, taking advantage of flexible purchasing agreements that allow the company to rapidly adapt to changes in demand. That softened the blow to earnings, which exceeded analysts’ estimates even though they were less than half last year’s level. The stock rose as much as 6.7 percent Wednesday morning.The world’s largest clothing chain operator has shown steady improvement after suffering its only loss on record in the first quarter. Chairman Pablo Isla is motoring on with a plan to invest about $3 billion in e-commerce, renovations and new stores over the coming three years to better position Inditex when the pandemic ends. BoF