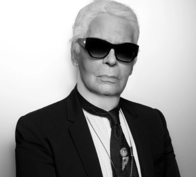 Karl Lagerfeld Dies in Paris
Karl Lagerfeld, one of the most prolific, admired and multitalented fashion figures of the modern age, has died in Paris, the house of Chanel said Tuesday. Lagerfeld worked tirelessly until the end, giving instructions to his teams for the Fendi fall ready-to-wear collection, due to take place in Milan on Thursday. The only sign of his declining health was his failure to take a bow at Chanel’s recent couture show in January. He was most closely associated with the French fashion house, where he was couturier since 1983, engineering one of the modern fashion industry’s first and most successful brand rejuvenations and propelling the fabled French name from near obscurity to the summit of international luxury. WWD

(TRAUB note:  Read our tribute to Karl Lagerfeld's Wonderful Turn of Phrase in this post) 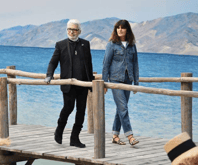 Chanel has named Virginie Viard, Karl Lagerfeld’s closest collaborator for more than 30 years, as its new creative director, the French fashion house said in a statement following the death of the legendary designer, which was announced on Tuesday. The move muffled speculation over whether Chanel might seek out another big name to replace Lagerfeld, who was 85 years old. Potential successors often cited by industry observers over the years included Hedi Slimane, now ensconced at Celine, as well as Phoebe Philo, the designer he replaced there, and Alber Elbaz, formerly of Lanvin. BoF

Apple and Goldman Sachs plan to start issuing this spring a joint credit card paired with new iPhone features that will help users manage their money. The card will be rolled out to employees for testing in the next few weeks and officially launch later this year, according to people familiar with the matter. The companies hope to lure cardholders by offering them extra features on Apple’s Wallet app, which will let them set spending goals, track their rewards and manage their balances, the people said. WSJ

Fast Company: The World's Most Innovative Companies in 2019

Fast Company named CaaStle in their top 10 list of the world's most innovative companies in retail. CaaStle is a clothing-as-a-service platform that allows other brands to rent out a portion of their inventory to customers. CaaStle now partners with brands like Ann Taylor, Express, Vince, and New York & Company to create a rental service for their clothes. CaaStle manages the rental inventory and dry-cleans each piece. It also equips the brands with data including what pieces customers are most likely to rent and how many times a garment is rented. All of this can help the brand determine what pieces to make for future collections. Fast Company

TRAUB note:  We are proud to be working with such an innovative company!

HBC, which runs North American retailers Saks Fifth Avenue, Hudson's Bay, Lord & Taylor and off-price retailer Saks OFF 5TH, on Thursday said it is shutting down its Home Outfitters business in Canada and is "performing a fleet review of Saks OFF 5TH's 133 stores." The company at this point expects to close up to 20 Saks Off 5th locations in the U.S. Retail Dive

LEGO Will Launch Its First Ever Sustainable Collection Made From Sugarcane

Later this year, LEGO is due to release its first ever set of sustainable elements in a bid to reduce their plastic waste. Made with a plant-based material sourced from sugarcane, the bioplastic collection is the first step towards the company’s ultimate goal to produce all of their products and packaging with sustainable material by 2030. My Modern Met

Josh Metz, Tinder’s former director of marketing, is now the chief marketing officer of ZitSticka, a new direct-to-consumer acne brand that is set to launch Thursday. The brand’s hero product, The Killa, $29 for a box of eight, is a transdermal patch containing freeze-dried microdarts that help ingredients such as hyaluronic acid, niacinamide and salicylic acid penetrate the skin to help clear acne cysts in the early stages. The product also contains a gentle peptide meant to help kill acne-causing bacteria. WWD

Does the name Carolina Lemke ring a bell? How about Kim Kardashian West? The former is an eyewear brand based in Israel with little in the way of name recognition in the U.S.; the latter needs no explanation and has fans in quite literally every corner of the world. Next month, they’re joining forces to debut a new sunglasses collaboration, dubbed the Kim Kardashian West Collection for Carolina Lemke. It will mark the brand’s official expansion into the U.S. market and should practically make Carolina Lemke a household name overnight. Vogue

Amazon Go secures space in the heart of London

For the first time, Amazon has expanded its Go store concept outside of the United States. The cashier-free store will be located in central London. It is not yet known how many stores the retail giant plans to open in London, but it will likely compete against U.K. retailer Marks & Spencer, as well as grocers Tesco and Sainsbury's. Retail Dive

FedEx, Rent the Runway team up on 'extra hours' service

Rent the Runway, a company that allows consumers to rent designer apparel and accessories, partnered with FedEx to use the logistics provider's "extra hours" service in the New York City area. The extra hours program, which FedEx launched late last year, processes and ships afternoon orders by the following day. Best Buy and AutoZone were retail partners when the service first launched. "Rent the Runway customers in that market can now place an order in the afternoon, and have their clothing and accessories delivered via FedEx by mid-afternoon, or earlier, the very next day. Retail Dive

Building on its lifestyle-centric concept, hair-care brand R+Co launched on Friday a collection of cosmetics, including a fragrance gel and a brow gel. The products initially debuted at New York Fashion Week and are now available for sale on RandCo.com, in retail partners including Nordstrom and DermStore, and in select salons. They were born out of the founders’ experience backstage during fashion shows and photo shoots, when they’d see stylists concoct tricks like using hair gel to tame brows and beards. Glossy